The essay analyses the Ecj decisions Viking and Laval where the court was called to answer the question of her jurisdiction upon trade unions freedom of association and the right to take industrial action. The Author focuses on the court's rationale with special regard to the following statements: (a) the horizontal effect of Ect articles 43 (freedom of establishment) and 49 (freedom of providing services), according to which private undertakings can rely upon free movement provisions against trade unions, since industrial action aims at concluding collective agreements and collective agreements fall within the scope of free movement provisions; (b) the right to take industrial action amounts at a fundamental right guaranteed by community law, but at the same time it also constitutes a restriction upon fundamental economic freedom, and it is a competence of the Ecj to strike a balance between them; (c) as far as the balancing between free movement and industrial action is concerned, industrial action, even when justified by the legitimate (non discriminatory) aim of workers protection, is subject to the proportionality test. A critical analysis of the above mentioned statements leads the Author to conclude the essay with some remarks on the theoretical and practical consequences of the Ecj interference in the balancing of "internal" constitutional values. 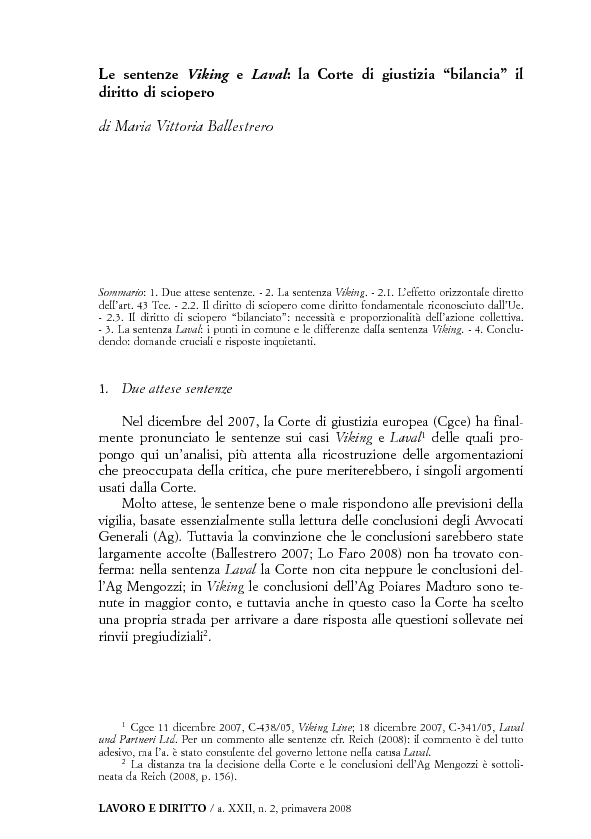