Taking the AG Conclusions' in "Laval" and "Viking" cases as a starting point, the essay explores some aspects of the troublesome relationships between (national) social rights and (supranational) economic freedoms within a context of negative integration. The author assumes that, reasonable as they may be, the AG Conclusions rely on some premises which could have been considered in a different way. Namely, some doubts could be casted on the AG statement that article 43 and 49 of the Treaty are both relevant and directly applicable to the collective actions carried out by the unions. Once accomplished the examination of such propaedeutic issues, the second part of the essay deals with the essence of the question: i.e. to what extent can national models of social regulation "survive" the full achievement of the economic freedoms in a single - and enlarged - market governed by the mutual recognition principle. It is maintained that, though part of the common constitutional language, the concepts of "Proportionality" and "Fair balance" between social rights and economic freedoms might not be appropriate in order to assure legal certainty. In conclusion a proposal is made to go back to pre-"Saeger" jurisprudence, by excluding from the scope of art. 49 non discriminatory measures which - as labour law rules - are indistinctively applicable. 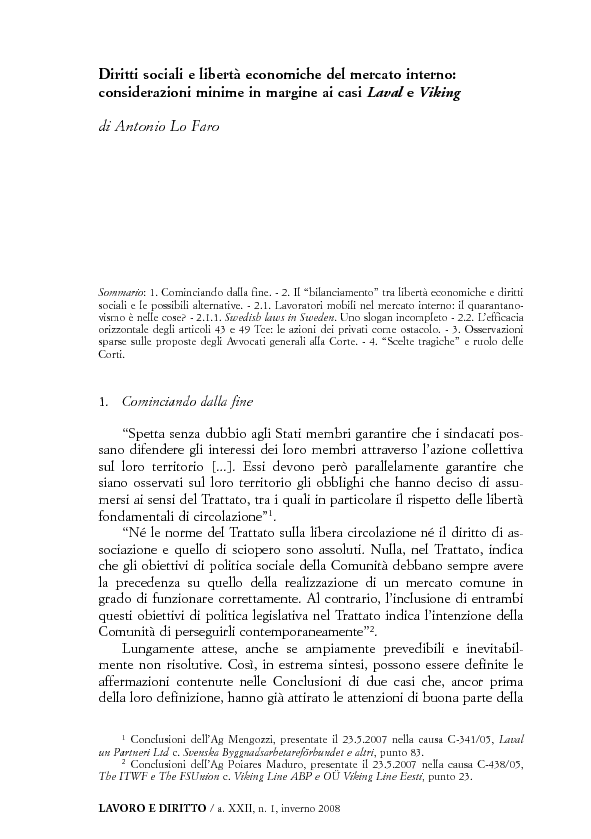