The essay first focuses on the "value" of job security, in relation to its protection, in EC law and in Italian law. On the one hand it looks at the due protection according to the Charter of Fundamental Rights of the European Union, the European Social Charter, the EC Treaty, the Fix Term Directive 99/70, the Gender Directives, all as interpreted and enforced by the EC Court of Justice; on the other hand, it looks to the very unequal levels of protection provided, by Italian labour law, in case of unfair individual dismissal, as interpreted by the Italian Constitutional Court starting from the sixties. Afterwards, the author tries to assess the consistency and the adequacy of the Italian system of protection against unfair dismissal in relation to some specific differences (the size, the structure and the ethos of the organization of the employer, as well as the personal status of the employee), all deemed by the Constitutional Court lawful grounds for a lack of protection or for a lower protection. According to the author's opinion, Italian ruling of unfair dismissal is neither fully consistent with the principle of equality stated by Art. 3 of the Constitution, nor with EC law. Some relevant examples can be mentioned, such as: the lack of protection for managers and domestic workers; the lower protection (very low compensation instead of reinstatement) for elders under some conditions as well as for ideological organizations' employees; the denied equalization of dismissals grounded pregnancy or maternity to dismissals grounded on other discriminatory factors (which involves the voidness of the working mother dismissal, but not her reinstatement). 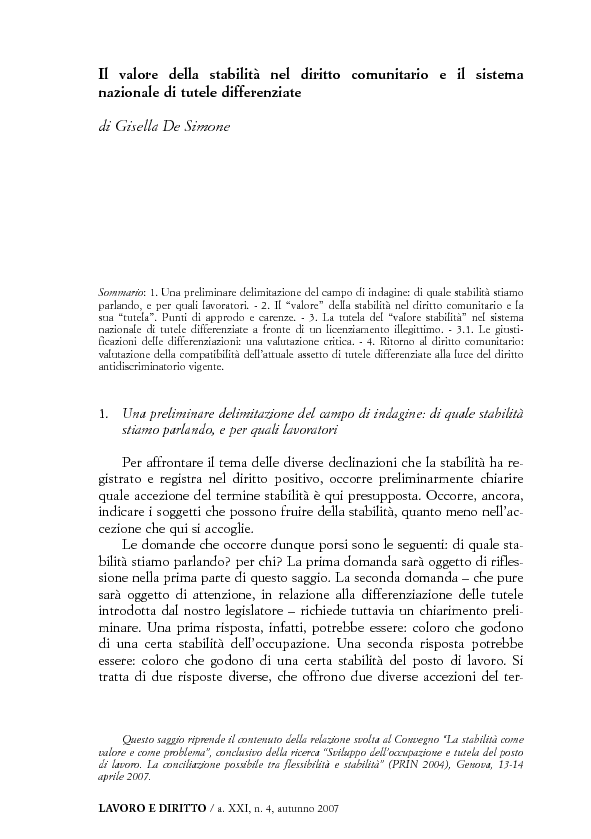