The development of Community law in the area of discrimination and equality of treatment may be said to be anchored in the construction applied by the Court of Justice of the European Communities in the field of equality of treatment between male and female workers, which has resulted in the emergence of general principles of Community law and the refinement of "pivotal concepts" for applying the principle of equality of treatment, e.g. the concept of indirect discrimination. It is clear that the evolution of Community law is marked by growing importance of the justifications the defendant must put forward to avoid being found guilty of discrimination. This growing importance of justifications is based primarly on the very notion of indirect discrimination, which the latest Directives define as a provision, a criterion or an apparently neutral practice likely to lead to particular disadvantage for persons of a given race or ethnic origin, religion or faith, disability, age or sexual orientation, as compared with other persons, unless the provision, criterion or practice concerned is objectively justified by a legitimate objective, and the means of achieving that objective are appropriate and necessary (Dir. 2000/78). This article examines the construction the Court of Justice has applied (particularly in the field of part time work) to the standards for examining such justifications; this is clearly a crucial issue, for the judge, in accepting justifications of an employer's behaviour or actions, must be able to arbitrate between the values that underlie the protection of the individual and the values applied by the market, that are often central to the employer's justifications. The second part of the writing tries to argue whether the current standards for scrutinizing justifications are sufficient to ensure that the objectives of Community law are complied with. 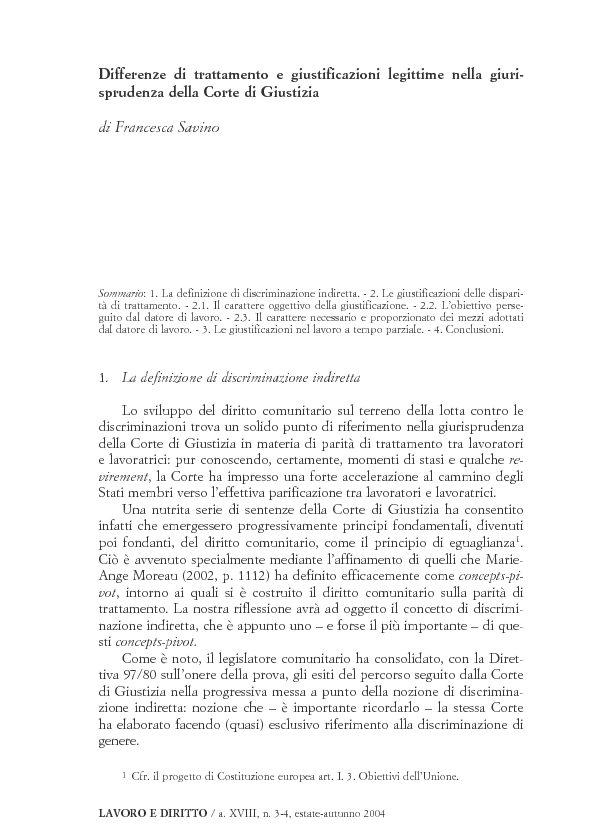