Digital platforms claim to have introduced profound disruptions in the way work is organized today, by providing the public with a new range of digital services, from food delivery to house fixing jobs. For years these new business model have drawn the attention of scholars, Courts and regulators, trying to re-adjust and re-discuss the issue of subordination, workers’ rights and protections. The present contribution expands on previous literature by highlighting an unprecedented profile of platform work: exploitation and caporalato (hiring of workers by an illegal intermediate). Thanks to the work undertaken by the Procura of Milan and the decision held by the Tribunal of Milan in the Uber Italy Srl case, for the first time, platforms have been unveiled in their articulation and the intricate system of subcontracting, which ultimately leads to work exploitation and caporalato. The article illustrates how firms of the Uber “galaxyµ organized work through the exploitation of migrant workers by creating a system of fear, made of threats, pay and fees deductions, illegal tax arrangements. The article proposes a reflection on the pressing importance of the themes of work exploitation around digital work and physical work through platforms, analyzing as well which initiatives have been promoted at national and regional level, involving both employers and workers’ representatives, and the State intervention for the prevention of work exploitation and illicit intermediation. 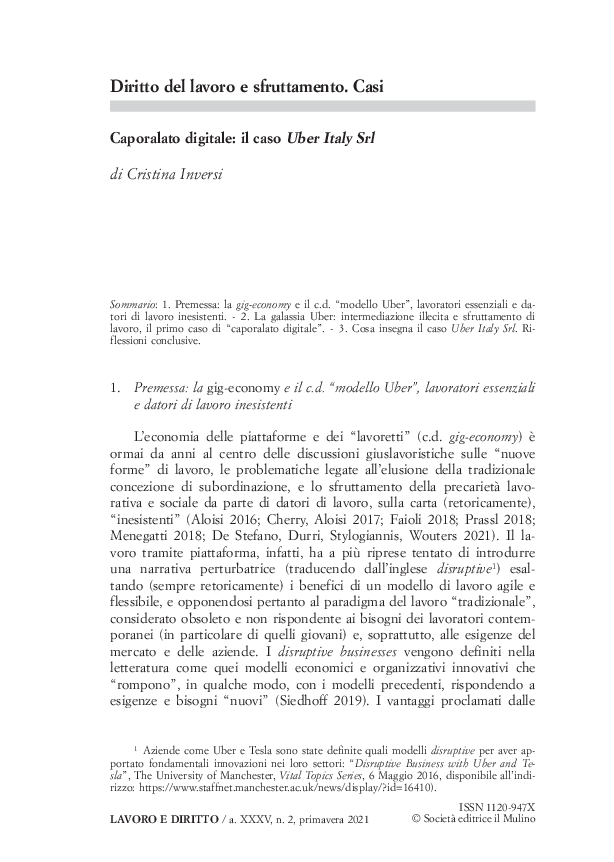