Malaysia is a nation of multiple ethnicities and faiths, and has specific laws that govern conversion to Islam, and, in some states, conversion out of Islam. In states such as Selangor which provide clear laws for converting out of Islam, individuals who intend to do so must file an application with the Sharia Court to obtain a letter of declaration of apostasy that enables them to remove the word Islam from their National Registration Identity Card (NRIC). The purpose of this research is to see how far the Sharia Court in Malaysia processes applications to convert out of Islam and to analyse case files and the decisions of the Sharia judges. The contents of eight case files on conversion out of Islam were analysed in this study, all of which were decided by the Selangor Sharia High Court dating from 2011 to 2015. Based on the case files, the findings of this study show that conversion out of Islam in Malaysia is a reflection of the social and religious strains pervading the community, such as the issue of marginalisation of Indian ethnicities and comprehensive government policies on Islamisation. Analysis of the case decisions on the other hand finds that Sharia judges have expanded the interpretation of religious texts regarding applications to leave Islam, yet they were not made based on the concept of 'freedom of religion' that may seem peculiar to a Sharia judge. The significance of this study is to demonstrate how Sharia Courts beyond Malaysia can process cases of conversion out of Islam in court without submitting the applicant to punishment and simultaneously ensuring the right to freedom of religion for every individual. 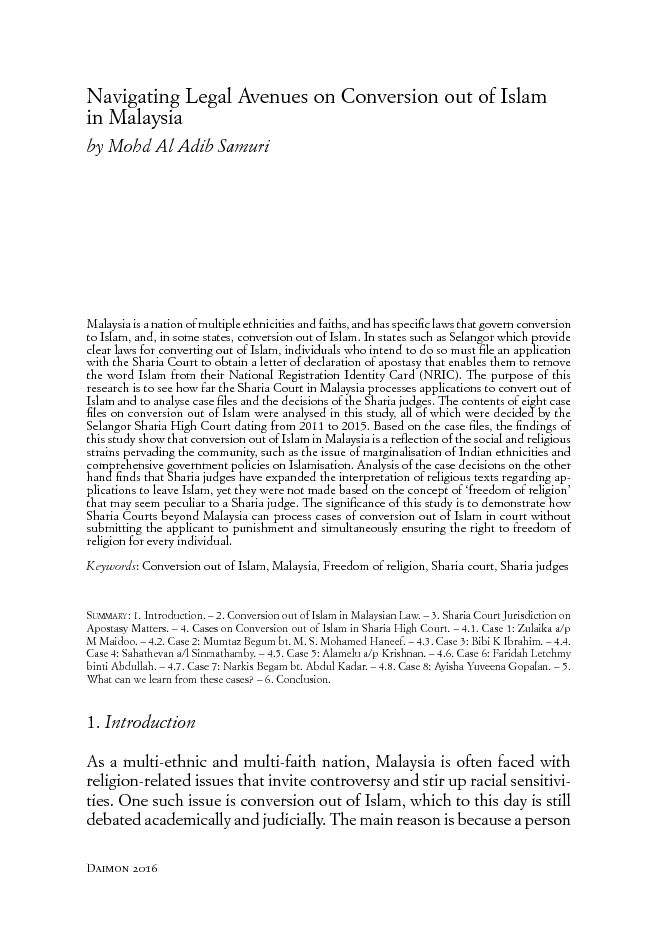