2014 is the fortieth anniversary of both the reform of the Concordat of 1929 and the first agreement signed with a religious denomination other than Catholicism. This essay considers the evolution of political relations between Italy and the religious denominations in the last 40 years, distinguishing different seasons. The first season is that of the earliest «intese» with religious denominations historically present on the Italian peninsula: the Waldensians and the Jews; the season is marked by subsequent «intese» signed with other Christian churches, generally «photocopying» the previous ones. The unifying feature of law and religion policy during these seasons seems to have been the absence of anypolicy. From 1989 until 1997 nothing happened. There suddenly arrived new «intese» that the parliament ignored until the summer of 2012, when it approved them by a legislative procedure that failed to appreciate their constitutional uniqueness. This was followed rapidly the last two seasons, that thanks to recent changes in case-law raised by the requests submitted by the atheists, have revived attention of the adequacy of the constitutional mechanism, at that moment thought for a religiously homogeneous society, concerned to ensure minorities legislative procedures similar to those granted to the Catholic Church , representing «the vast majority of Italians». At the end of forty years, the situation is paradoxical. The absence of ecclesiastical politics has produced a fragmented law system, which discriminates between religious denominations who have obtained a law according to an «intesa», and those that are still regulated by the 1929 law on «permitted cults». The situation is especially trying for Muslims and Jehovah's Witnesses, who together have at least two million followers in Italy. In conclusion, one wonders if this paradoxical result is not due only to the policy absence, but also to the supervening senescence of the mechanism provided by art. 8, third paragraph, of the 1948 Constitution. 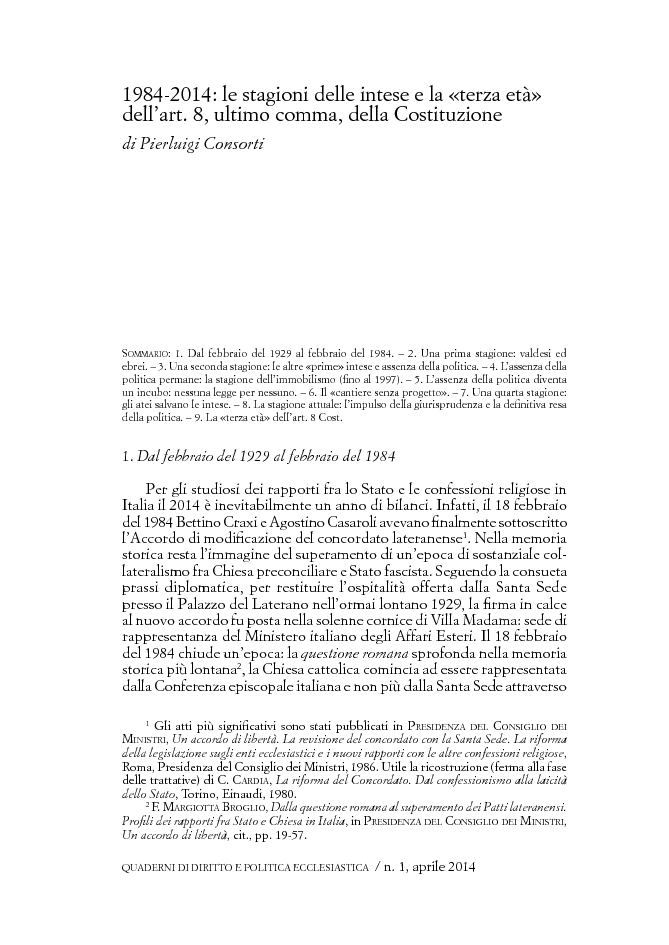