After having recalled the narrow interpretation of parliamentary privilege in L. Casanova and L. Palma in light of Art. 24 of the Statuto albertino, and the opposite thesis of V.E. Orlando according to which the forms of immunity do not constitute a singular jus derogatory of the principle contained in the Statute of equality before the law, but rather constitute a common jus deriving from the principle of the sovereignty of the constitutional organs, the author takes up the matter of the persistent recalling of the 'sovereignty' of the constitutional organs as the basis for jurisdictional immunity, highlighting the historical and juridical improbability of this thesis in the presence of a rigid constitution, of the proclamation of equality before the law and of its recognition as the highest principle of the system, as well as of the non-existence of sovereign organs in the constitutional State. In the author's view the Italian system is characterised by the principle that within it there is no prince or subject above the law, and there are no longer persons subjected to a legislative authority different from that of other citizens, for which reason only parliamentary authorisation for arrest, and not to start proceedings, might constitute the empirical criterion for the conciliation of political immunity and legal liability. The author's introductory historical and political remarks prepare the way for his examination of Law 140 of June 20, 2003, indicating - including in light of constitutional jurisprudence - the problems of unconstitutionality and refuting the arguments used in justification of a standard-setting law of this ilk. In particular, Art. 1 introduces a personal privilege, bringing into being an inconsistent discipline in violation of the formal equal effectiveness of laws. By the same token, the exhumation of so-called pregiudiziale parlamentare (parliamentary prejudgement) would be in open contradiction with articles 24, 101 and 102 of the Constitution, while the expansion of the concept of "opinions expressed in the exercise of their [Members of Parliaments'] proper functions" seems to be on a collision course with the interpretation given to Art. 68, Par. 1 of the Constitution by the Constitutional Court. Moreover, the author finds confirmation of the validity of the charges of the unconstitutionality of Art. 3 of Law 140 of 2003 in the rulings handed down on January 30, 2003 by the European Court of Human Rights, which condemned the Republic of Italy in the Cordova-1 and Cordova-2 cases for the violation of Art. 6, Par. 1, European Court of Human Rights. 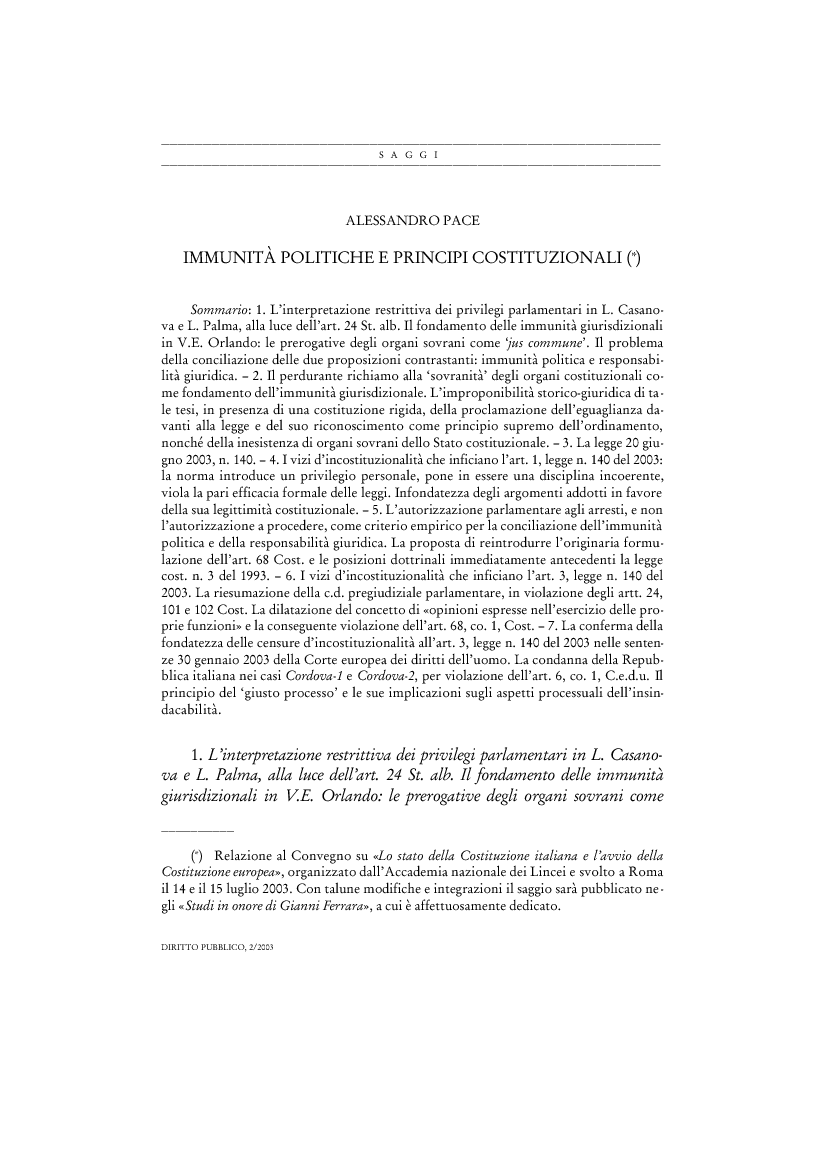