The work regards an analysis of administrative simplification and normative rearrangement, and attempts a parallel consideration of profiles concerning the ends of normative policy pursued and the issues more directly regarding the relations between the sources of law utilised. Simplification decidedly asserts itself as an inspiring principle for action for the permanent reform of the public administration and the reallocation of normative complexes in new sources of cognisance with the coming into force of Law n. 59/97, which with Art. 20 introduced in our system a new species of law having an annual cadence, by means of which to activate a broad process of delegislation in the area of procedural discipline and the drafting of legislative and regulatory single texts. However, the formulation of the provisions contained in the "mother law" opened the way to departures from the dictates of Art. 17, Par. 2 of Law n. 400/88, which punctually took place, with all that follows in terms of the substantive respect for the reserved powers in administrative matters, as well as regarding controls of legitimacy. In relation to normative rearrangement, the first law of simplification (Law n. 50/99) introduced the controversial model of the mixed single text wherein it was possible for primary and secondary level provisions to find room. In this way the provision pursuant to Art. 20, Par. 11 of Bassanini I was drained of concrete preceptive force, while authorising the production of acts that became impossible to place in unitary terms within the hierarchy of sources, and whose provisions, although "formally" unified, naturally continued to be subjected to different typologies of controls. Art. 20 of Law n. 59/97, albeit partially modified by the two annual laws of 1999 and of 2000, had confirmed over time its option for a rather clear distinction between profiles of administrative simplification, concerning which delegislation was the main if not exclusive instrument, and profiles of normative rearrangement, as well as for an at least tendentious characterisation of the enactment of single texts as an operation not bearing on the substantive content of the "gathered" norms. The law of simplification for 2001, which wholly replaces the text contained in Art. 20 cited above, instead superimposes the two levels just mentioned, delineating a model of simplification and normative reorganisation centred on the codification through legislative decrees of normative law, both substantive and procedural, of legislative rank containing the discipline of the subject matter identified by the annual laws. The legislative decrees will be qualified to innovate the normative laws previously in force, in pursuit of the end of deregulation and of the reduction of the province of the exercise of administrative functions to the advantage of the free market. An auxiliary, subsidiary role is assigned to regulations, both for delegislation and otherwise, vis-à-vis the role played by decrees/codes and, in particular, the discipline of the aspects more directly concerning the structure and dynamics of administrative procedures. Finally, the problems pertaining to the relations between State sources and regional sources are considered in light of the reform of Title V of the Constitution. The enactment of "yielding" regulations in matters of regional competence ought no longer to be admissible, such as was provided under the old Art. 20, Par. 2 of Law n. 59/97, indicating the necessity of a more rigorous distinction between "State simplification" and "regional simplification". As for the yielding secondary norms, the law of simplification for 2001 eliminates from the mother law the provision that attributed to delegislation regulations temporary effectiveness in regional matters, while it confers the function of dictating the fundamental principles in matters of concurrent competence to legislative decrees. Given the tendency of the laws of delegation to introduce principles and guidelines in extremely broad terms, this might end up by attributing to the central government a penetrating and materially extremely vast power of conditioning and direction over the exercise of the primary normative power of the Regions, in a manner evidently not coherent with the letter and, above all, with the ratio of the provisions contained in the new Title V. Likewise foreseeable is the incompatibility of the position of the fundamental principles in matters of concurrent competence and the dictates of Art. 11 of Constitutional Law n. 3/2001. 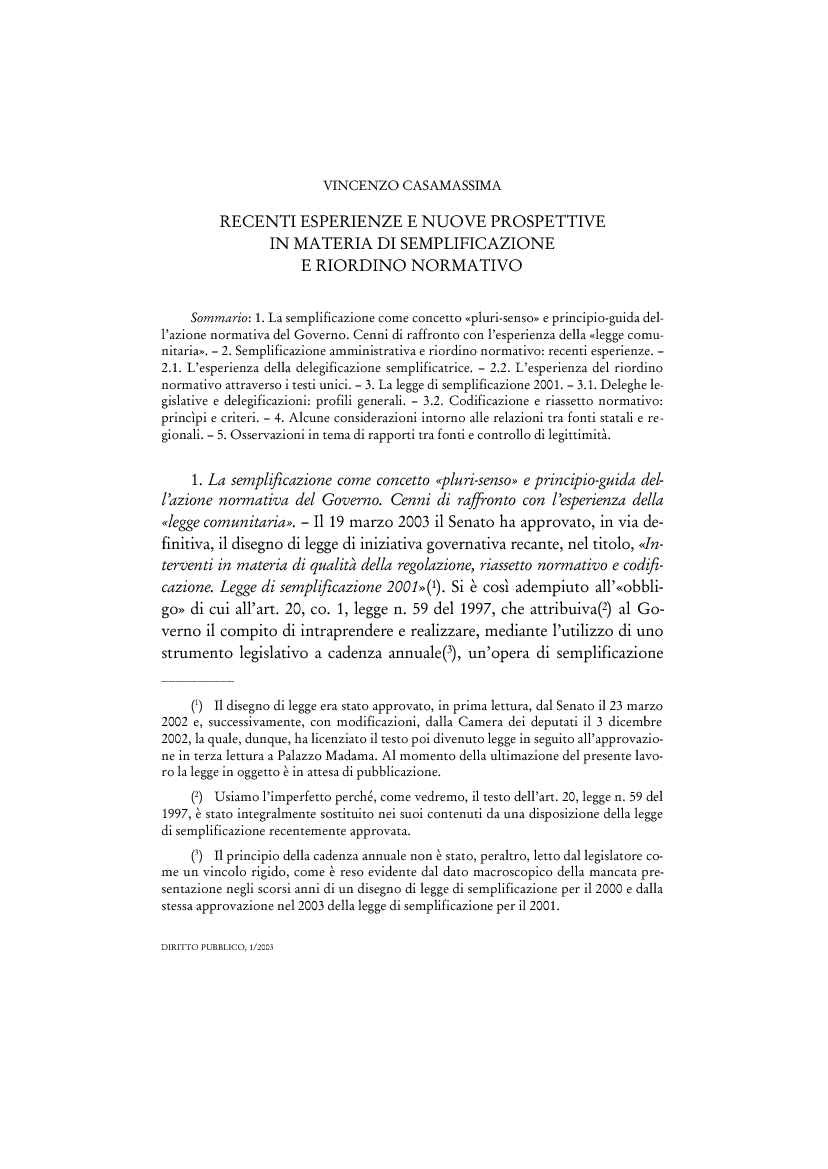