In reflecting on the scholarly work of U. Pototschnig, the author observes how it can constitute an excellent starting point for attempting to straighten out our ideas on old but still open problems, as well as on (really or apparently) new questions raised by the most recent institutional and legislative developments. As the author observes, it suffices to consider the still permanent necessity for an updated arrangement of the matter of concessions, concerning which it must be admitted that the distinction still made by many between concessions and authorisations, and based on reserved activities, is not satisfactory as regards the former, not only because of the denials deriving from such well-known theories as that of transport "under concession", but also in light of the most recent positive law. This comes even before the other theme that necessitates thorough examination in view of the novelties produced not just by Community law, but by the reforms as well. On the one hand, these reforms have consisted of the liberalisation and privatisation of certain public services formerly a public monopoly; and on the other, of the establishment of independent authorities for their regulation: namely, the theme of the specific economic regulation which at once regards and connotes the public services, understood as services of public utility. In an era when, in tandem with instances of liberalisation, the organisation of public intervention has indubitably acquired novel features, it can still be said, as Pototschnig observed in 1988, that "in truth, the exact meaning and the exact scope of the constitutional norms, which form the basis for the intervention of the public authorities in productive activities, to a considerable extent still remain indefinite". And, the author finally observes, in order to conduct a significant investigation into the matter taking into account the constitutional data relevant today, as well as current regulatory experience, certain paradigms identified by Pototschnig, along with his lesson on method in its practical application as inferred from his scholarly thought, provide a starting point that is valuable, even irreplaceable, at the beginning of a new century. 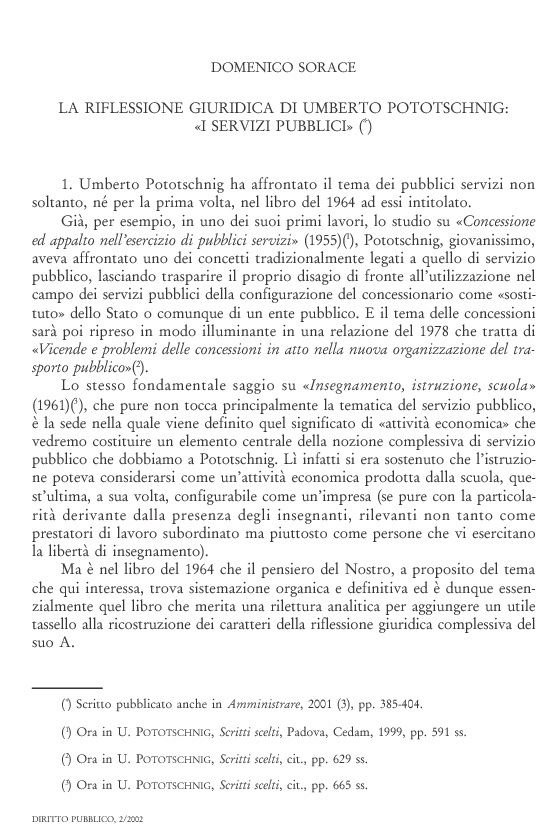