The present work sets out to analyse the existing relations between the Constitutional Court and the Court of Justice of the European Communities. From an examination of constitutional and Community jurisprudence it has emerged that after an initial period when the relationship between the two courts essentially developed on the level of relations between the Community and internal orders, in the ensuing phase the dialogue between constitutional judges and Community judges seems to have practically ceased. Above all in the matter of fundamental rights, the Constitutional Court generally passes judgement without making reference to rulings handed down by the Luxembourg court, and vice versa. It is evident that this represents an attempt by the Council ("Consulta") to defend itself and the Italian order from the pervasive influence of Community law. However, this attitude risks producing highly negative consequences since in so doing the Court removes itself from all Community issues, placing itself on the sidelines of the European integration process underway. It is therefore necessary to renew the dialogue between the Constitutional Court and the Court of Justice, and the most practical way to do so would seem to be by reaffirming the theory of countervailing limits. In this way, the two courts will again be able to engage in dialogue and to mutually benefit from their respective experiences. This will hold true until such a time when the Community order is endowed with a European Constitution elaborated by a European constituent assembly, or else through the full involvement of representative assemblies of the peoples to ensure guaranteeing more democracy and transparency in the decision-making processes pertaining to the institutions involved. Regarding the latter, a higher degree of representativeness is likewise called for, as well as a direct, effective control over their performance, which also implies forms of political responsibility. Further required is a full and effective jurisdictional safeguarding of fundamental rights independent of the achievement of Community objectives, etc. 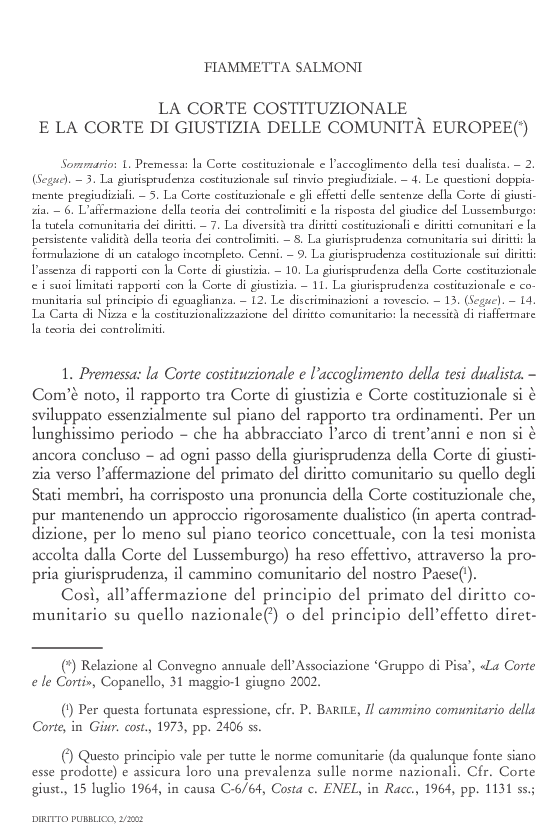