The author examines the theme of the opportunities and limits that the new arrangement of relations between the State and autonomous administrative areas produced by administrative reform laws dating from the 1990s (in particular, d.lgs. n. 112 of 1998) present in the matter of outsourcing in the cultural sector. Though an examination of the normative data the author observes how the whole matter of the distribution of competencies is still an open question, with numerous hypotheses being bruited about. A reasonable solution is still to distinguish a well-defined narrow core of "legal" protection afforded cultural assets (practically speaking, the exercise of authoritative powers to identify, tie up and watch over such assets) to be conserved by the State, as opposed to a broader area where safeguarding intertwines with elements and policies proper to the sector that are necessarily related (a single example will suffice: the training and selection of specialised technico-scientific staff, regardless of what public administration or private subject is involved) and which ought to be assigned to local government, albeit with elements of necessary co-operation between and among the different institutional levels. Such approach, which, as is known, already emerged at the time of the drafting of the above-mentioned 1998 law only to be excluded from the final version, seems today to find additional reasons for support in the new text of Title V of the Constitution, including due to the fact that if the definition of protection recognised under Article 117, Paragraph 2s) were the same as practised pursuant to the laws in force, one cannot see what might be the object of the "forms of agreement and co-ordination in the matter of the safeguarding of cultural assets", the definition of which is remitted by Article 118, Paragraph 3 of the Constitution to an apposite law. Under the different heading of the organisation of the administrations that operate in the sector, the author observes that the State administration above all ought to be prepared in such a way as to: increase the transparency of and control over discretionary decisions, to be maintained as such without reducing the scope thereof by use of automatic devices; separate those who regulate from those who manage (something which is possible only through agreements and pervasive circulation of information to and from all concerned); to compel those who regulate to dictate their own prescriptions in advance and, save for transgressions on the part of the operator or exceptional and unforeseeable circumstances, to remain silent afterward, since otherwise the way is opened for an admixture of will and decisions that takes the regulator within the administration, with the administrator being unable to count on any assurances. Lastly, under the heading of rules, the author observes how there have to be core elements that cannot be defined the same way for all: involved here are elements pertaining to the discipline of cultural assets, the satisfactory arrangement of which is preliminary to any and all relations between public and private forces; to the regimen of the activities, such as the desirable transfer of intervention on cultural assets to the province of supply of services contracts, such as, for example, the restoration of movable cultural assets, today placed in the province of public works, or the necessary clarifications in the matter of the foundation of participation; the forms pertaining to assignment which ought to be subjected to a special discipline in a way analogous to what recently took place regarding services to individuals; to the regulatory relations between the public body and the outsourcing counterpart (resorting, for example, to the service supply contract when the outsourcing has as its object a public service, as now provided for in the final paragraph of the recent Article 113-bis introduced by Article 35, Paragraph 15 of the 2002 appropriations legislation); to the duration of the award and to the stability of the transfer in the medium-term; to aspects regarding the guarantees for individuals and for groups (from the safeguarding of the freedom to engage in research for scholars in the field of cultural assets, to the safeguarding of the individual user with respect to the operator, and to issues raised by the direct and indirect effects of tax relief). 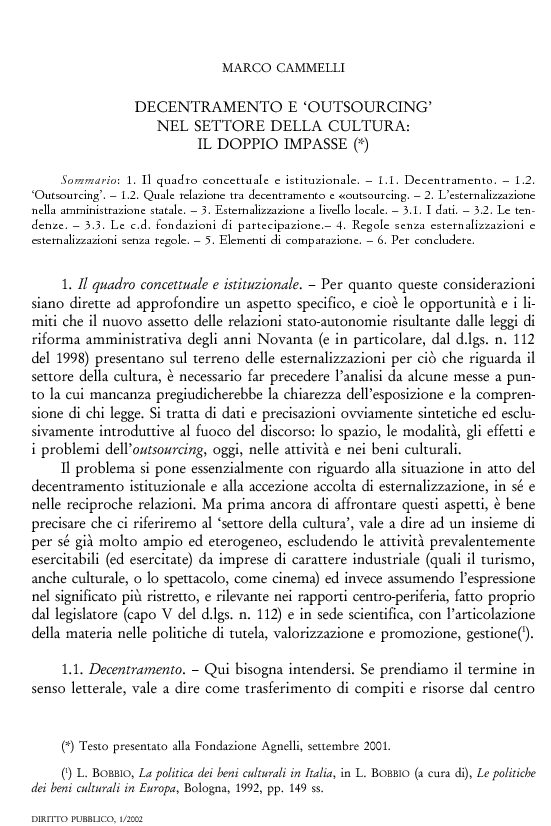