The author examines the law that went into effect on February 10, 2000 entitled "law relative to the modernisation and development of the public service of providing electric power" passed in the applying the Community directive on the liberalisation of public services. The author asks himself whether this law does not represent a provocation in an industry where the word "modernisation" evokes much earlier plans for modernisation and facilities in the sector, so that in France an administered economy and public service often appear to be the opposite of liberalisation. However, this law can also be considered from another standpoint, one that places it in line with the liberalisation of the sector. The reference to public service does not really contradict Directive 92/96 on the matter of the domestic market for electric power since Article 3, Paragraph 2 states that the States "may impose certain public service obligations on companies operating in the electric power industry". Moreover, according to the author the legal definition of the consistency and of the conditions for the functioning of the public service may facilitate the future opening up of the market, to the extent to which it will not be possible to assign the public service to other operators. As for modernisation, in the author's view it can be interpreted as being oriented less in the direction of public service per se than toward the law applying thereto: the effect of modernisation, then, is that the 2000 law causes the electric power industry to switch from an administered economic activity to a regulated one. The author, in defining the French approach to the matter of electric power by analysing the meaning of the notion of regulation, observes how the 2000 law, even while modernising the system, still remains faithful to the French administrative tradition extraneous to both the free market and regulation, instead favouring the prevalence of ministerial power, central planning, monopoly and the needs of public service, where the reference to public service nevertheless appears ambivalent and possesses great potential for evolution. 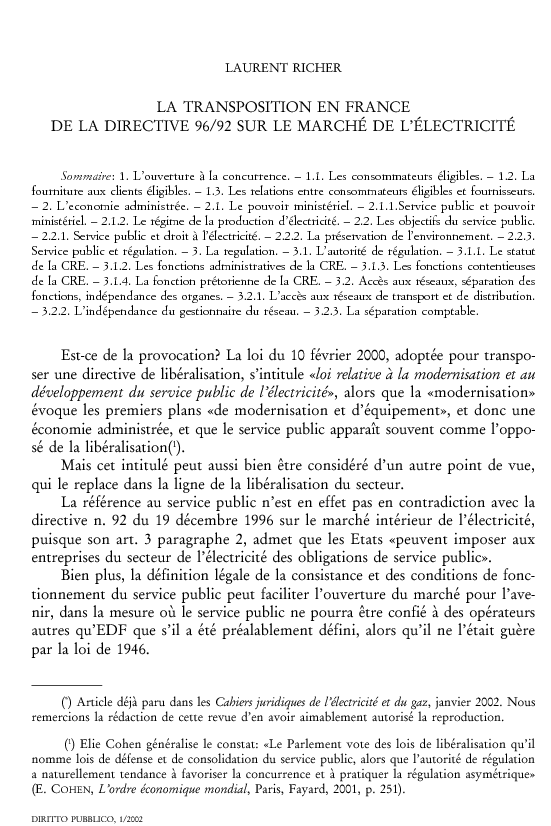