The lack of a full awareness of all the consequences of the privatisation of a sphere of administrative action brings with it two types of risks. First, there is a risk of underestimating the effects thereof, implying thoughtlessness in introducing the privatisation. Second, there is a risk of not making the most of them, thus also losing the benefits of it. As a consequence, grey areas may be created, which the administrative judge often takes advantage of in order to re-appropriate to himself spheres removed from him by privatisation. Within this framework it seems most useful to analyse the different relation that is created between the private action of the administration and the norms that discipline their organisation and function from the standpoint of the figure exercising judgement over this relation: the ordinary judge. To that end the field of investigation that appears most congruous concerns the powers that the administration uses as an employer in the organisation of public offices and the management of personnel. In fact, traditionally a public law reading has been given of said matters, which today turns out to be completely overturned by the privatisation that has involved this sector beginning in the 1990s. A comparison between the way the administrative judge used to construe the legitimacy of the exercise of those powers and the way the ordinary judge does so now makes it possible to evidence the principal differences between the public and private power of the administration, and therefore to identify all the effects of a given privatisation. The results of the analysis delineate a series of consequences. The first is that private power, unlike public power, cannot be represented as a unitary entity, but is instead fragmented inasmuch as defined, from time to time, in terms of difference, by the dimension of the particular rights it is faced with. Among other things, as a result the rules concerning its exercise are not configured in terms of a general legal status, but must be construed with reference to the way the legal system protects the rights which it may bear on. The norms on procedure or on the grounds of acts, therefore, do not apply to every manifestation of power as such, but only to those cases where the system has identified the same as rights belonging to anyone subjected to the exercise thereof. Another set of consequences derives from the inversion of the viewpoint of the judge: while the administrative judge construes the discipline to apply taking the norms on the power as his starting point, the ordinary judge starts by a recognition of the arrangements with which the system guarantees the right. On the one hand, it follows that a series of positions of strength that the administrative judge used to make derive from a generalisation of certain authoritative features of power have fallen by the wayside; and, on the other hand, the inapplicability to the relation of certain principles that the latter considers placed as a guarantee of the public interest and not as a direct protection of the subject who finds himself in the face of power. The sensation that might derive therefrom is that when the administration uses private power it does not have to take into account the public ends toward which its action is oriented. However, this is an idea that cannot be shared, since the exercise of a private action is also verifiable with reference to the function in a broad sense. This is so both under the profile of the control of the final outcome of the action and with reference to the correctness and good faith of the public administration's behaviour, which the ordinary judge construes among other things by taking into account the general principles that must inform it. Arising from the foregoing is a different relevance of the function which, along with the other consequences, it is well to take into account if the desire is to proceed to privatisation with an awareness of what is entailed. 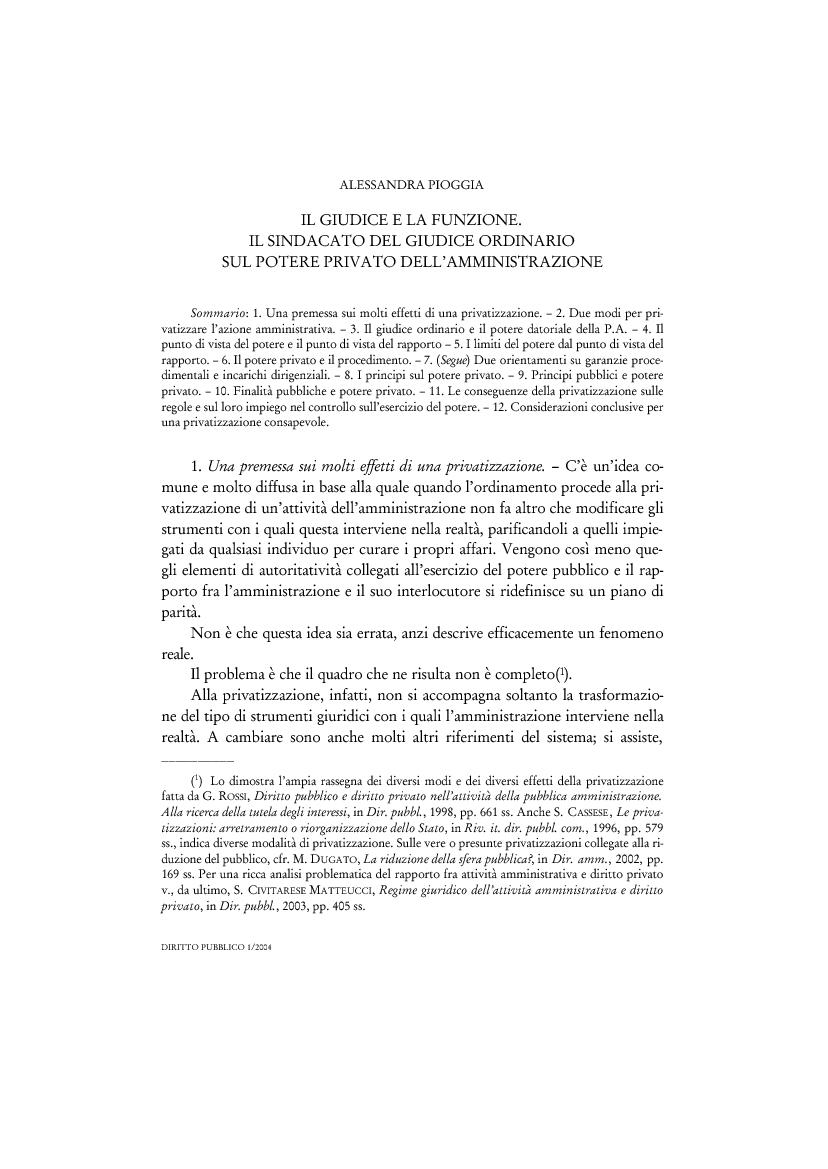