The debate over "method," which has been at the heart of twentieth century culture and has even permeated sectors where the technique of study seemed most definite and well established, has also filtered into administrative law. For all that, it does not seem to have contributed to providing a solution to the basic problem of the jurist, which as a practical matter is posed in terms of a confrontation among the possible interpretations of a norm or criterion for the legal solution of a case in the presence of a lacuna. According to the author, the problem assumes an even stronger connotation for administrative law, an area where the principle of legality is central, and which by its very nature demands a high degree of certainty and objectivity (otherwise its reason for being would vanish), but which at the same time is characterised by the fragmentary nature of positive normative law, by the magnitude of the lacunae, all nonetheless in a context of typically operative needs. On the juridical plane the debate over method has had the practical effect of overcoming dogmatism, with its overly refined, "absolute" criteria for the interpretation of the norms, but the overcoming of these certainties has left a void. According to a common way of thinking, the analysis of the norms would in fact come to an end with the identification of the logically admissible interpretations (that is, interpretations not contradictory in terms of the norm itself): beyond this threshold it would no longer be a matter of legal rules, but only a matter of the sensibility, ideology and values of the interpreter. As far as the author is concerned, the response to these conclusions is to be looked for above all by clarifying what meaning is to be attributed to juridical investigation, in order to do which there must be a knowledge of the legal norms to start with; this condition must be fulfilled in order for the juridical investigation (even when performed in an historical, sociological or axiological perspective) to allow a better understanding of the juridical phenomenon in concrete terms. Once having accepted this starting point, we must next recognise a threshold of utility, interest, importance, etc., which is proper to juridical investigation and is expressed by its coherence in terms of the actual norms. According to the author, several currents of thought have developed starting with this postulate. One such is realist or with a "sceptical outlook," in reaction to which it can be summarily stated that two counter-currents came into being: the first tends to admit a nucleus of shared founding values, while the second tends to revalue, at times even integrating them, the traditional criteria for juridical interpretation. If the debate over method in juridical science can be summed up by the conflict between "weak" thought that has given up pretensions to notions of "certainty" and "truth," and "strong" thought that tends to admit a sole correct solution to every problem, for the author the need to recover a basic clarity about the notions that we employ in administrative law is an aid to grasping a different dimension of the debate over method. In the second half of the twentieth century certain voices were raised expressing ways of conceiving juridical interpretation that seemed to overcome the dichotomy between "strong" and "weak" thought through the recovery of "practical reason." These voices centre on a reflection on argumentation, understood as a rational procedure for arriving at a truth - albeit impermanent - which holds that "between the absolute truth and non-truth there is room for a truth to be subjected to continuous revision thanks to the technique of producing arguments pro and con." 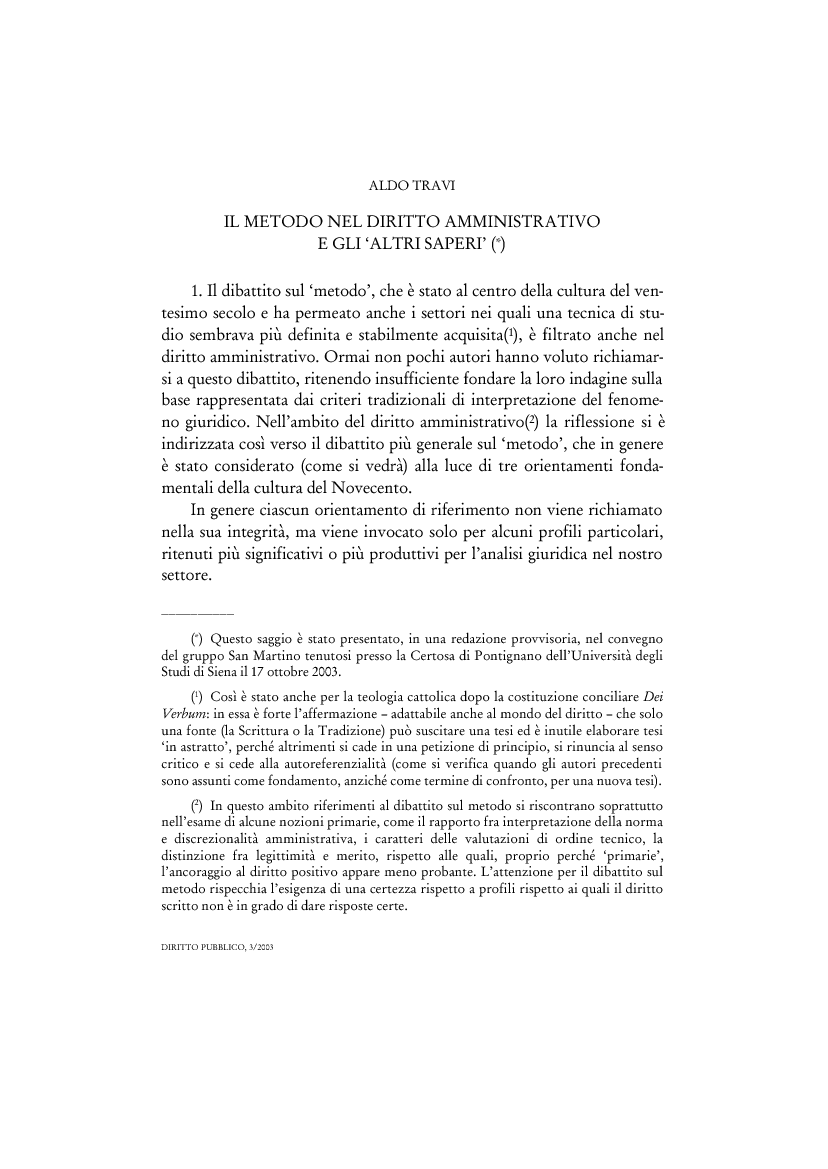