The essay focuses on the impact of the EU financial and economic response to the COVID-19 crisis on the doctrine of conferred powers between the UE and the Member States as well as on the legal framework ruling the EU integration as such. Some of the questions that are dealt with are, e.g., what about the new framework of conditional spending while implementing and using the Next generation EU funds? Which instruments are going to be arranged to rule the consulting and monitoring functions of the EU Commission to check the use of the NGEU and MFF funds by Member States (probably adapting the outline for National Reform Programs and European Semester)? Do we need new patterns for a European public spending legal framework? The forthcoming legal scenario and the fiscal rules system once the monetary policies of the ECB and the suspension of the States’ aid rules will come to an end are also at stake. It is difficult to say if the extraordinary measures of monetary policies implemented by the ECB will be brought back within the limit of the conferred powers after the crisis, or will call for a reshape of the competencies framework of the institution and its tools. The work analyses the legal conditionalities (constraints) to access the financial resources of the NGEU and MFF funds to consider what kind of legal framework is going to emerge by the new settings of rules on the main topics of these new financial proceedings. In order to assure at the same time the protection of the EU financial interest national governments shall fulfil the relevant country-specific challenges and priorities identified in the context of the European Semester as well as the recommendations set by the Commission and approved by the Council. Another issue is, then, the growing dichotomies between competition law and European policies because of the huge amount of money that will be managed by the national public authorities. Competition versus sustainable development: this could be seen as the new dimension of the intervention in the economic system by the public institutions, as it will have a severe impact on the competition not really as regulatory instruments. Tensions among competition law and new policies will then arise. All these questions seem to claim for a relevant change in the EU legal order to face the consequences of this unprecedented move in the UE economic and financial policies. While, a further question is becoming more and more relevant after the new assessment of the market regulation throughout the world. The issue of how to deal with the State aid from foreign countries to their cross-border relevant companies within the European Internal Market. The last issue dealt with in the article is, eventually, the online platform economy regulation taken in the global perspective, moving from the new pieces of legislation planned by the EU Commission (the so-called DMA and DSA) and the relevant Report collected by the US House of Representatives about Investigation on Competition in Digital Markets. 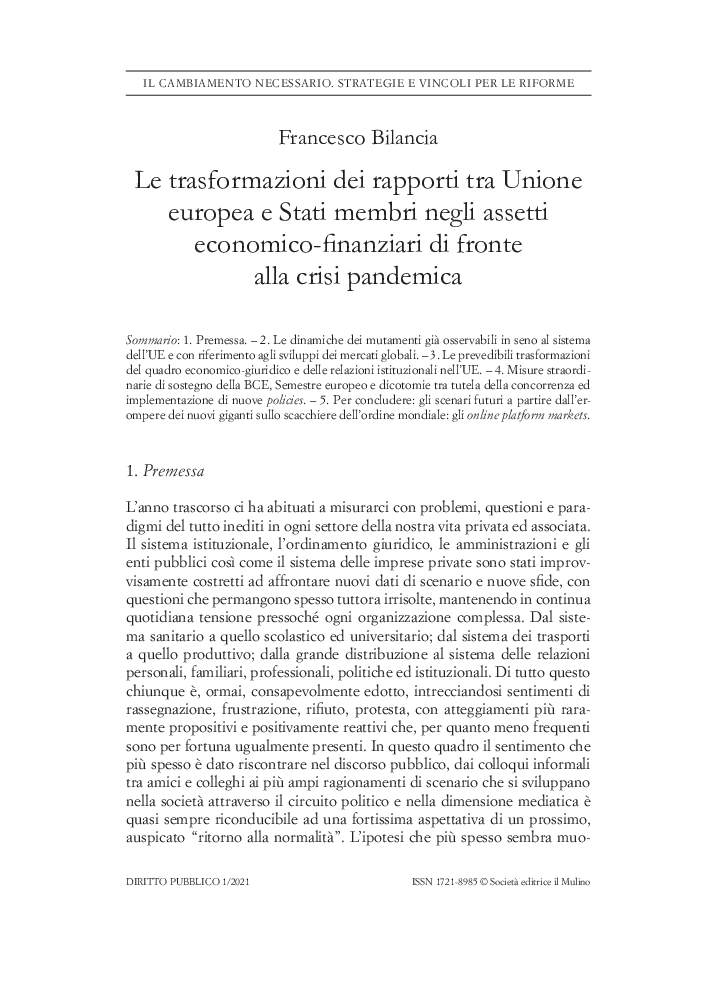