This paper aims at analysing how the Comprehensive Economic and Trade Agreement (CETA) and the Transatlantic Trade and Investment Partnership (TTIP) ought to be considered not only mere trade agreements, but they do represent the paradigm of an in-depth institutional transformation which marks the current phase of neoliberalism. These kind of partnership agreements which set-up Free Trade Areas - partly in a different way if compared to other regional Trade Agreements and the global network of bilateral investment treaties - involve the establishment of cooperation bodies, stakeholders committees and a panoply of arbitration court procedures for conflict resolution. These bodies are necessary in order to fulfil both the legal harmonization and the demolition of the so called «non-tariff barriers to trade» meaning the constellation of norms and standards that rule the production and exports of goods and services according to different national-based legal systems. These «living agreements» affect the institutional relations of our representative democracies. This paper will try to show the extent to which this process, theoretically conceivable as a new stage of the State governmentalization, can be described as institutional governmentalization: a system which leads to embryonic forms of a new post-democratic politics, built upon the interests of specific social actors, who are able to impose their power, but also, to a relevant extent, to imprint their «organizational image» to State institutions. This essay is organized as follows: the first section deals with the political nature of partnership agreements and the secrecy regime of the negotiations; the second and third sections problematize how these partnerships influence the pillar of the modern sovereignty, that is to say the law-making power. Thereafter, this paper offers a critical conceptualization concerning the broader question of the arbitration system for the protection of foreign investments. 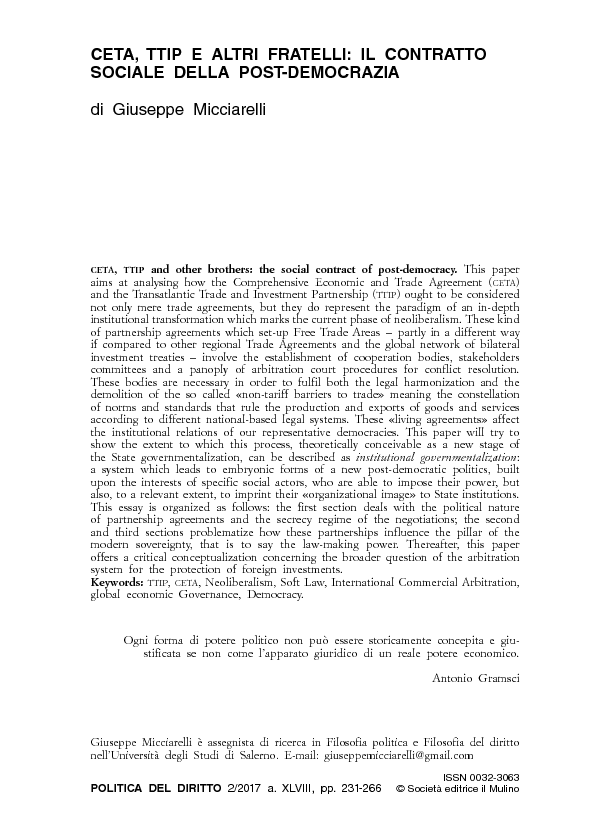