The mutual guarantee system - composed of the so called confidi - is one of the most important peculiarities of the Italian financial system. In other European and non-European countries similar institutions operate in smoothing SME's access to credit, but the phenomenon is much more capillary in Italy. In times of financial crisis all instruments and mechanisms aimed reducing credit crunch have particular importance and tend to be used as a channel for public intervention with the goal of sustaining economic growth. The long financial turbulence started in 2007 is not an exception under this point of view. Confidi's activity has been growing substantially as a consequence of a strong demand of guarantees coming from the SMEs and thanks to a massive inflow of public resources. In this paper we evaluate the impact of the current financial crisis of the «confidi system», looking at the level of activity, the inflow and distribution of public resources, the financial, economic and managerial equilibriums of the guarantee institutions. The analysis is focused on the prudentially supervised confidi (ex Art. 107 T.U.B.) and on a sample of the larger unsupervised confidi (ex Art. 106 T.UB.), during the period 2009-2010. The group of confidi we examine represents numerically a small fraction of the mutual guarantee universe, but covers roughly 90% of the guarantees' stock at the end of 2009. In other words, it is the pulsing hearth of the system. Around this heart numerous smaller entities operate, but they are often characterized by such a minimal level of activity that their survival prospects in the medium term are in serious doubt. 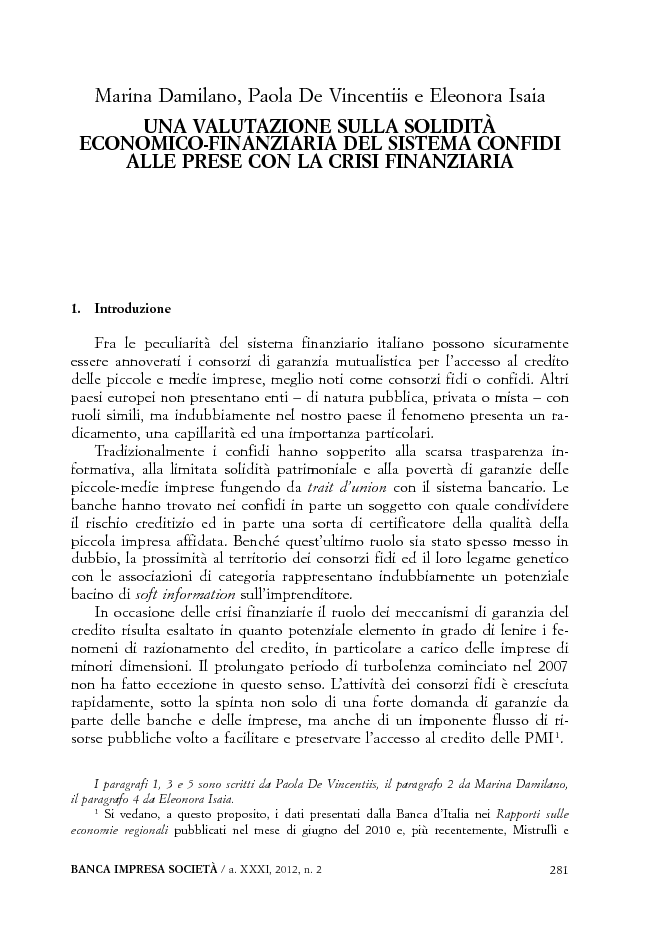