The best economic literature has already convincingly demonstrated that companies can achieve an anti-competitive collusive equilibrium through the use of algorithms. On the contrary, the question of whether European antitrust rules can be applied to this phenomenon has so far been little explored. The only case decided by the Commission concerns a group of vertical agreements aimed at controlling, by means of monitoring software, the level of prices on the downstream market. However, the greatest risks to competition arise from algorithms that can induce or reinforce horizontal collusive coordination. This work is devoted to the analysis of the application of European antitrust rules to this type of conducts. In a nutshell, the conclusions reached are as follows. The continuous and repeated sending, through a signaling algorithm, of a price signaling, accompanied by a coherent conduct according to the reactions - cooperative or not - of the competitors, puts in virtual but effective communication the companies, which, in this way, manage to reach a real «meetings of minds», in the form of a concerted practice under Article 101 Tfeu. Instead, the use of self-learning algorithms by a group of companies may represent one of the «correlation factors» through which independent companies are able to predict their reciprocal behavior and are therefore strongly induced to align their behavior in the market, so as to jointly constitute a collective dominant position within the meaning of Article 102. Finally, as far as the liability regime is concerned, it has been ruled out that, at present, the use of «self-learning» algorithms could shield the company from liability for antitrust violations. Ai forms, however sophisticated and self-learning, are not given a legal personality capable of assuming responsibility for their decisions. The relationship between the principal and the commercial agent can be applied by analogy to the case in question. 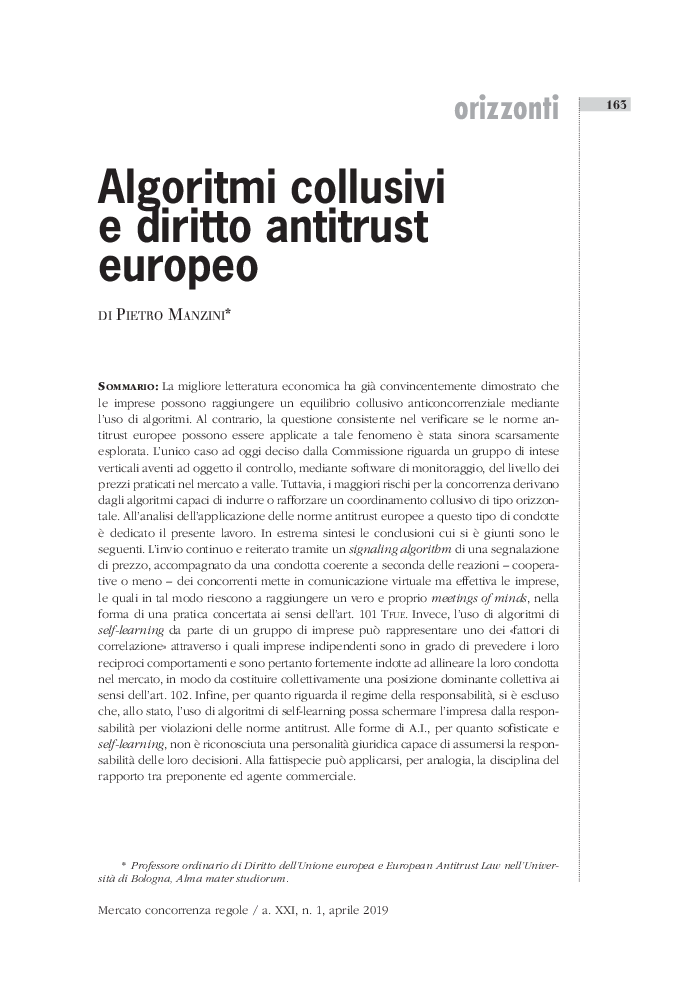