There is no doubt about the decisive role that information plays in the market system: it's also decisive in determining a price as correct as possible. For this reason it does not make sense anymore to debate on whether or not to impose by law its disclosure: on the other hand, the idea that a listed company may decide to give life to an informative blackout is almost paradoxical and in any case in all important legal systems there is a mandatory rule in this regard. Likewise, it must be understood that the contribution from the so-called behavioral finance can not be ignored, as it is now out of the question that biases affect both retail and institutional investors (ie the most important subjects in the markets system and to which particular attention must be paid when making legal changes to that system). A reform concerning the information has recently been implemented, within the Eu, in the context of the so-called Capital Market Union, and this is relating to the prospectus. In the context of the Capital Market Union, we are also thinking about making changes to the private placement, in relation to which there are some rules in Italy but not a self-sufficient law.The companies involved with private placements are usually small and not transparent, and in fact this way of negotiating is functional to solve the critical issues related to information asymmetry. Unfortunately this market is frequented mainly by large non-bank investors, ie a type of investors not particularly widespread in Europe, and this is also why in our continent private placement markets are much smaller than in United States. 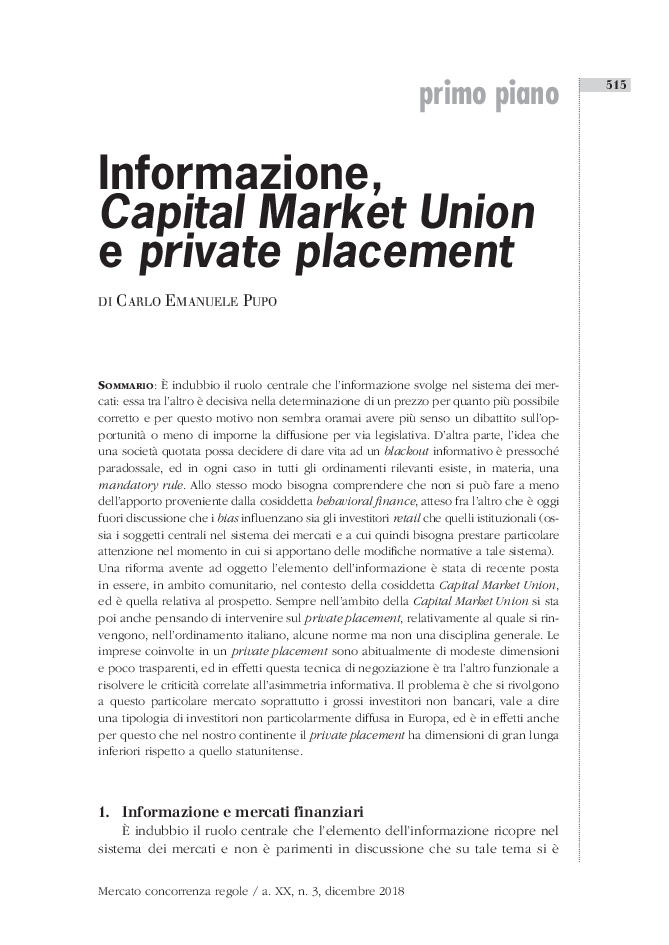