The newly adopted directives significantly reform the regulatory framework of communications. The directives currently approved include a "Framework" directive and specific directives covering access and interconnection, authorizations, universal service and the rights of users. The European legislature proposed a unified approach whereby all electronic communications, including radio and television, as far as is possible, without distinctions based on technology and content. In particular, the Framework Directive proposes a new balance between the European Commission and the national regulatory authorities (NRAs), by granting the latter the ability to identify national markets while at the same time providing for the European Commission's preventive control as to compliance with EU law. The new framework drastically reforms the prerequisites and procedural steps for the imposition of "ex ante" obligations upon 559 the undertakings that hold a significant market power in a given market. In this respect, the adoption of concepts deriving from competition law (namely, product and geographic relevant markets, single and joint dominance, leverage of market power) is the key feature. This article aims at analyzing the new Directives and the relevant "guidelines" issued by the European Commission, in order to answer two fundamental questions. First, will the reform trigger a step back for "ex ante" regulation in favour of competition law, as originally envisaged? Second, will the reform provide the NRAs with the correct range of discretion in their assessments? The conclusion reached is that regulation will more probably step forward rather than back and that, while the adoption of competition law concepts can help to reduce the ambiguities between the respective scopes of competition law and regulation, this method may also be a source of increased uncertainty. Furthermore, on certain key decisions, the directives provide the NRAs with ample and arguably excessive discretion. Accordingly, the article's authors condone the European Commission's power of controlling compliance with EU law (even before a decision by the NRAs). The authors further conclude that, contrary to the past, the newly adopted directives require a significant contribution by the national legislature to ensure a sufficiently certain and fair implementation of the new framework and to solve the questions that remain open. 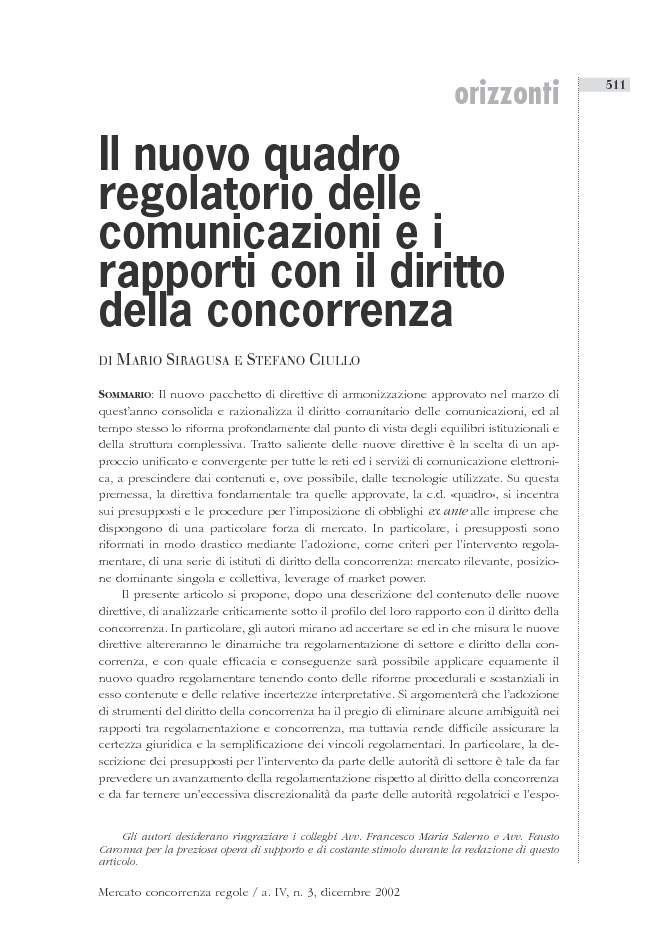