This paper deals with the relationship between antitrust and regulation as it emerges from the examination of the recent stream of commitment decisions from both the European Commission and the Italian Competition Authority in the energy sector. Critics of commitment decisions argue that they risk to push antitrust authorities towards a sort of «regulatory drift» with an incentive to open poorly grounded cases and to accept commitments not directly related to the competition worries but aimed at solving pre-existing critical situation. The paper reckons that the introduction of commitment decisions has certainly determined an hybridization of antitrust activity; at the same time it gives a strictly (energy) sector specific analysis which allows less pessimistic conclusions as far as the European Commission and Italian Competition Authority experience is concerned. As for the nine cases closed with commitments by the European Commission in the period 2008-2010 in the energy sector, the idea is that we observed a use of antitrust procedures to pursue competition policy goals in a market where the Sector inquiry of 2007 led the Commission to complain for an unsatisfying level of competition. With regards to national cases, instead, we maintain that the existence of an independent regulator, with a deep knowledge of the energy markets and a strong enforcement stance, worked as a sort of positive externality and reduced the risks steaming from the adoption of regulatory commitments by the antitrust authority. The paper concludes with some general policy considerations related to the Italian institutional framework and in particular regarding the need for strengthening the coordination between AGCM and AEEG and the urgency to establish independent regulatory authority in those economic sectors which still lack them. 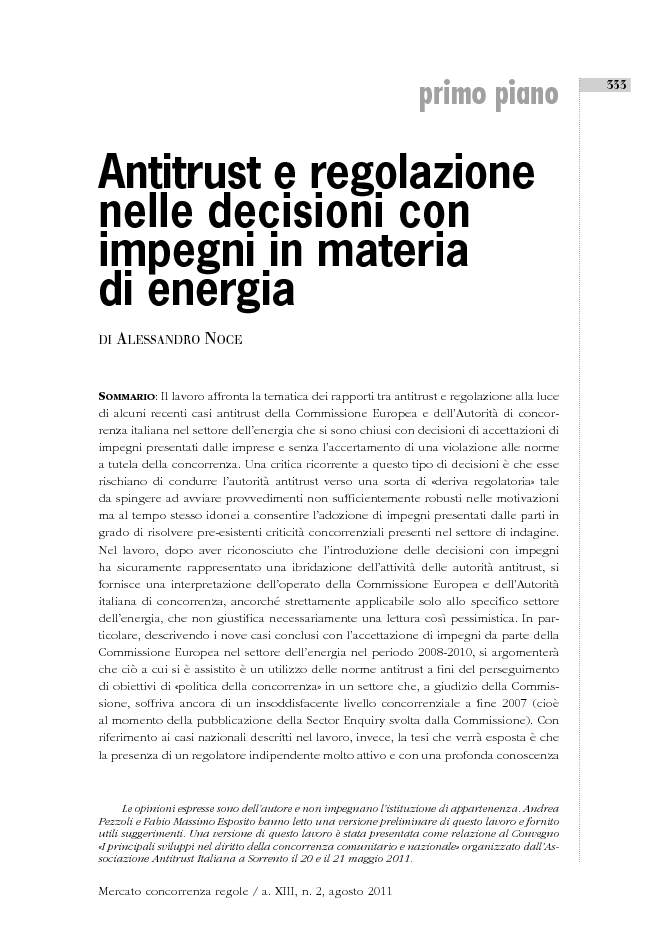