The Italian merger control regime provides that if either the Italian turnover of the target exceeds  47 million, or the Italian turnover of all the undertakings concerned (e.g. the total turnover of purchasing undertaking plus the target turnover) exceeds  472 million, pre-merger notification is mandatory. If an undertaking which achieved a turnover higher than the second threshold purchase a «part of an undertaking» it must also file if the purchased asset has a minimum value. No de minimis rules are provided by the Italian merger control regulation. Thus, the peculiarity of the Italian system requires a precise definition of part of an undertaking. The scope of this article is to clarify the distinction between the purchase of part of undertakings which give rise to merger filing duties from the purchase of assets which do not require any filing at all. An important decision of the Italian Administrative Supreme Court (Consiglio di Stato) and the precedents of the Italian antitrust authority and of the EC Commission are taken into consideration. In the article, a new criteria for the «minimum» definition of part of an undertaking (in a merger control scenario) is proposed; not only the ability of the asset to autonomously generate a turnover is taken into consideration in such a definition, but also the ability of an asset to create or strengthen a dominant position in existing or new markets. In this perspective, the purchase of an essential facility, of a State «concession» (Concessione) which grant protected markets or of assets which could facilitate the creation of barriers to entry in certain markets could be classed as part of undertakings also if such assets do not have a direct ability to generate a turnover. In the article it is suggested an amendment of the Italian merger guidelines, in particular, a more clear definition of part of an undertaking in said guidelines is required, taking also into consideration the recent decision of the Italian Administrative Supreme Court described in the article and the principles laid down by the consolidated jurisdiction notice of the EC Commission. A de minimis rule in the Italian merger control regulation is also suggested. 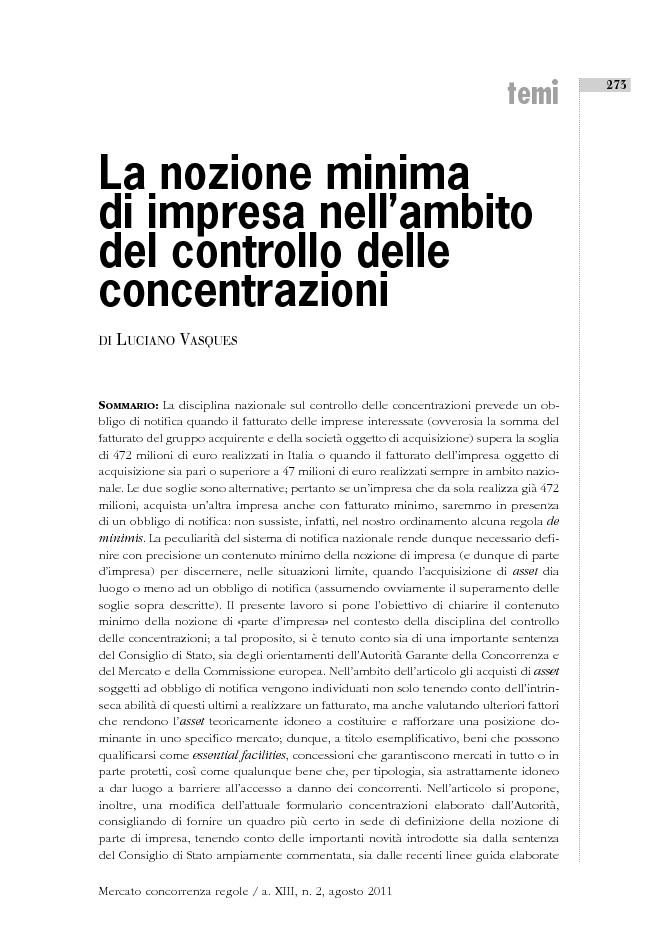