This article deals with the increasing interest of the European Union in social services, focusing on European action on national healthcare policies. To this aim it considers the main documents of the European Commission about this issue and the case-law of the Court of Justice, which, since 1998, has led to a vast debate about the "free movement of patients". The core of the analysis regards a possible equilibrium between the European conception of the Welfare State and the promotion of a market competition, which is still the fundamental pillar of the European Community. Referring to the different European models about healthcare services, particularly attention is payed to the quasi-market pattern, the one which, in the healthcare field, seems to better reconcile the goals of general interest and competition market practices. Also in Italy we have had, since the 90s, a series of reforms inspired by pro-competition models. The European Court of Justice considers health care services an economic service, although it is aware that the European tradition is widely based on healthcare guarantee within a public framework, which should assure a universalistic healthcare service. The access to healthcare service is seen as a right which every citizen is entitled to and it is usually purported that, along with other social rights, such a right forms a relevant part of a modem conception of citizenship. According to this approach hospitals and other healthcare structures are normally public and they are expected to work for people's welfare. Healthcare services, therefore, have often been characterized, particulariy in Italy, as "administrative assignments" undertaken according to a plan, with no room for market competition. The definition of healthcare services as economic services seems to undermine this model. However, as a matter of fact, it appears unlikely in our contemporary legal systems that the State is not committed to sustaining the social request for healthcare. Therefore speaking of a "healthcare market" means asking ourselves if and how competition factors can go along with healthcare policies carried on by political authorities. Anyway it is still quite hard to sever - provided it is desirable - the tight connection between the idea of the Nation State and the creation of a wide system of welfare. It is therefore difficult to imagine a scenario in which Europe, through market or quasi-market oriented policies, substitutes States in order to build a "European Social Model". 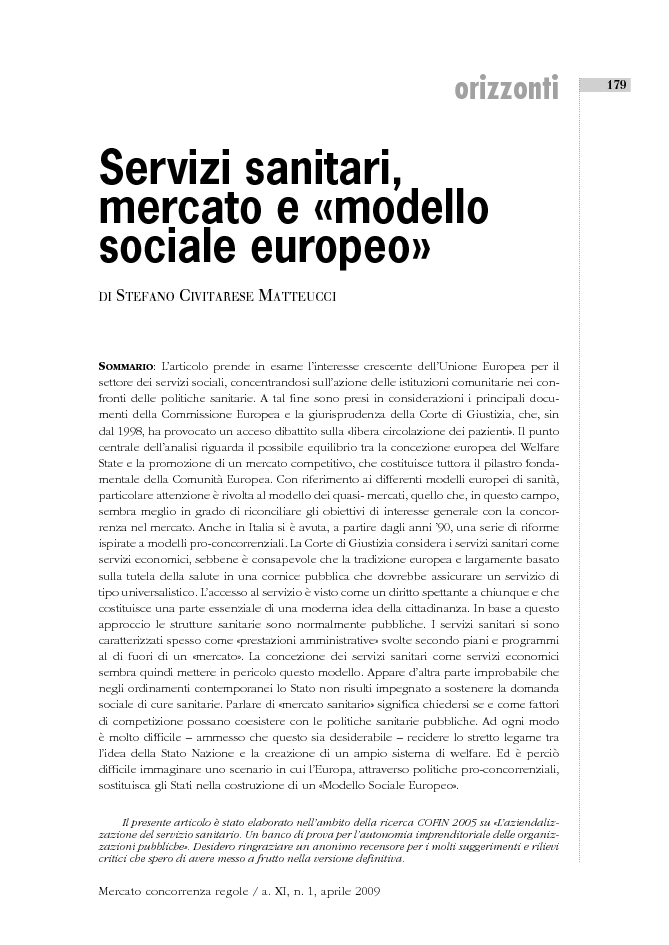