Energy security is a priority in the agenda of Western countries. A suitable regulation can offer a great support to the exploitation of new sources of energy, can boost investments in new infrastructure and develop competition, with positive effects on consumers' welfare. However, since the first European directives for electricity and gas entered into force more then 10 years ago, the objectives of efficiency, competitiveness and security have not yet been reached. The first problem is the conflict of interest when a transmission system operator is vertically integrated in the production and supply business. The legal and functional unbundling introduced by the existing directives does not eliminate the risk of discrimination and distortion of investment decisions by the incumbent company. A second shortcoming of the existing regulation is the unsatisfactory level of power and coordination at European level of national regulators. Finally, serious issues are caused by the poor coordination between transmission system operators. As a result of these deficiencies, incumbent companies in the electricity and gas market still enjoy a dominant position in their national markets, with serious effects on the development of competition. The purpose of this article is to present the main shortcuts in the european electricity and gas markets and the elements of the regulatory reform presented by the European Commission on September 19, 2007. With the "third package" the Commission proposes to implement an effective unbundling through either the ownership separation of the network from the production and supply activities (the preferred option) or the so-called ISO model where the TSO is fully independent in fulfilling its tasks but the ownership of the network is still in the hands of a vertical integrated company. In the new legal framework, regulators will be more independent from the industry and the government and will be coordinated by a new established Agency of Regulators in order to promote the harmonization of national regulations and handle all cross-border regulatory issues. The establishment of a more formalized structure of coordination among system operators will help the operation and the development of interconnections between Member States. The article takes into account numerous reports conducted by the Commission, in particular the impact analysis done by DG Energy and Transport, the sector inquiry of DG Competition, the annual reports issued by national regulators and other studies from outside experts. The experiences of different Member States has been also useful for the assessment of the Commission's proposal. 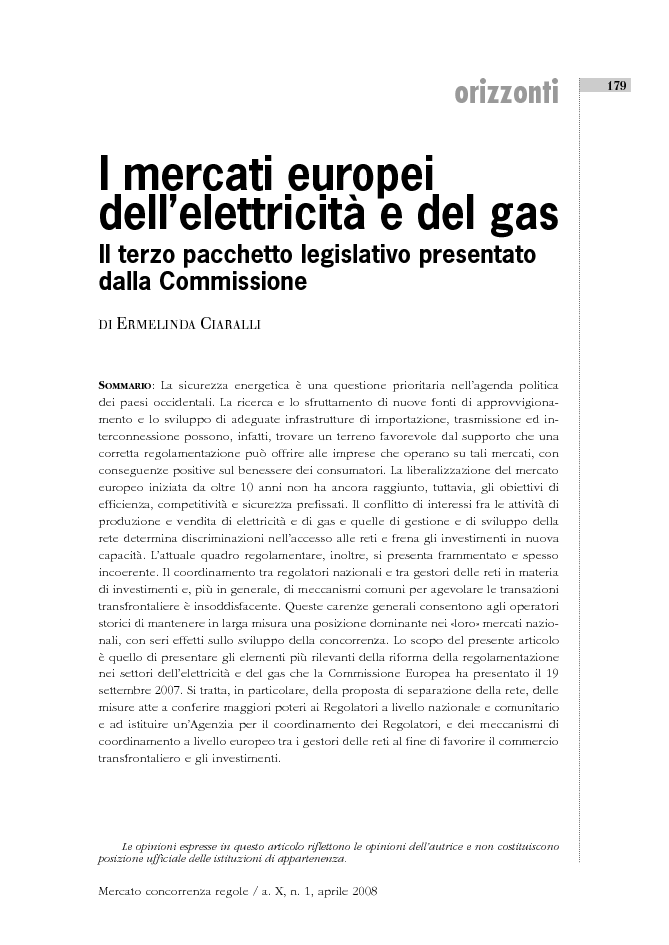