The so-called Lanzillotta Bill is the last of a series of attempts to reorganize the Italian Local Public Services sector. It aims at granting to all consumers universality and accessibility to essential services. It also promotes competition, free movement of services and equal treatment. In order to achieve these results, the Bill prescribes a mandatory application of public award procedures by local governments. In case the application of a public award procedure is not possible, local governments have to motivate their decision pointing out the reasons why the free market had not been optioned. Currently, on the contrary, it is very frequent that local governments apply the award of a public contract to semi-public companies without calling for tenders. These companies are legally distinct from the contracting authority, but they are characterized by a certain degree of control, which is similar to the control that local governments exercise over their own departments. Moreover they carry out an essential part of their activities together with the controlling public authority (or authorities) and they are completely owned by the latter. As a consequence, it appears that the liberalization process has been arrested. The paper first analyses the uncertainties that derive from the legal and judicial framework now in force, and second it examines the Bill. In order to implement a more effective legal framework the author proposes a minimal regulatory model based on the needs of the market and on the consumers' interests. This model is characterized by a clear distinction between the roles and the functions of the different actors of the sector, so as to guarantee the independence of the regulator. In particular, it assigns: the planning function to local governments, the monitoring function to internal offices with a high degree of independence from the local government and the management function to the provider companies. Currently, on the contrary, local governments play at the same time the role of the provider and of the regulator, therefore pursuing conflicting objectives and thus finding themselves in a situation of conflict of interests. As a consequence, the efficiency of the market is jeopardized. The paper also underlines that the fact that local governments play multiple functions has negative effects on the governance of provider companies, thus lowering the quality of services provided and reducing the performance of the corporate. In conclusion, the paper argues in favour of promoting the liberalization of the sector in which the provider companies are completely owned by privates. 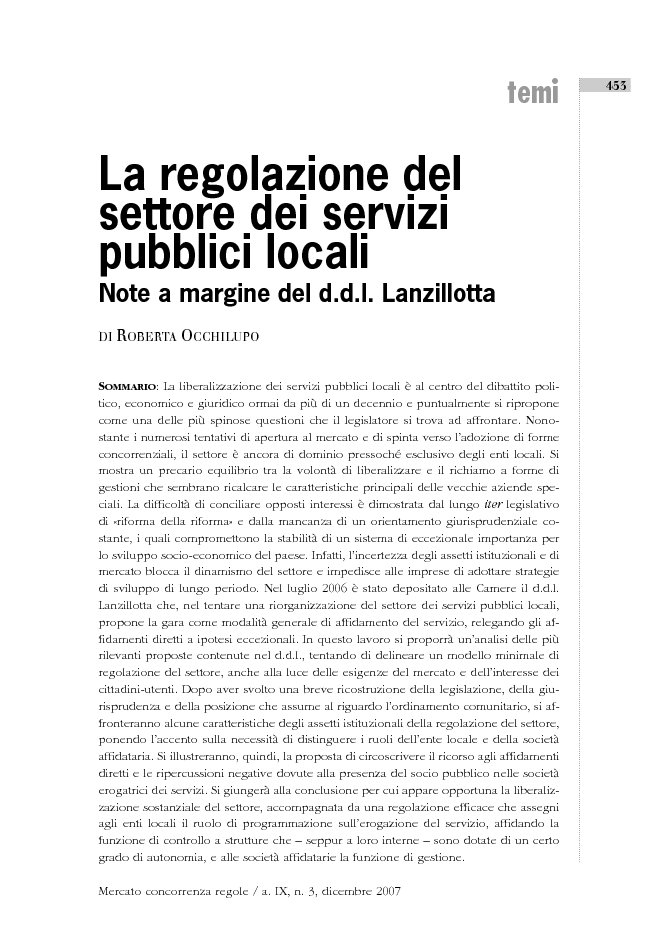