The objective of the article is to identify the key bottlenecks impeding the modernization of the Italian water sector, the reduction of its high degree of fragmentation, and the increase of the flow of private capital towards it. The latter is increasingly required in a sector characterized by high investment needs - to improve water quality levels in line with the EU directives - and by decreasing public resources, which have traditionally been the major source of funding. The main criticalities identified are: i) the lack of a clearly independent national regulator; ii) the insufficient incentives for efficiency improvements of the water companies due to the conflict of interest of the local regulatory authorities (AATOS), which often have the same shareholders as those of the regulated entities; and iii) the asymmetry of information between the conceding party, the concessionaire and the banks, leading to lengthy renegotiation processes of the investment plans, before financing is attained. The authors strongly emphasize the need to establish a national, independent and credible national water authority in Italy (comparable to OFWAT in the UK), in order to set up a stable regulatory framework in the country (as opposed to numerous local ones) and give comfort to medium-long term investors. In addition, they propose that the AATOS should give up their role of local regulators and focus exclusively on their responsibilities as conceding entities of the local water services and as controllers of the service quality delivered by the concessionaires. Finally, the authors suggest that a stronger commitment and cooperation of the banks at the moments of definition of the investment plans and assignment of the services to the concessionaires could accelerate the closure of the financing packages. In order to overcome the informational asymmetries it is proposed that the concessions should include the possibility of "one" renegotiation between the conceding party, the concessionaire and the banks, based on clear rules, within certain deadlines, and under the supervision of an independent technical and financial advisor. 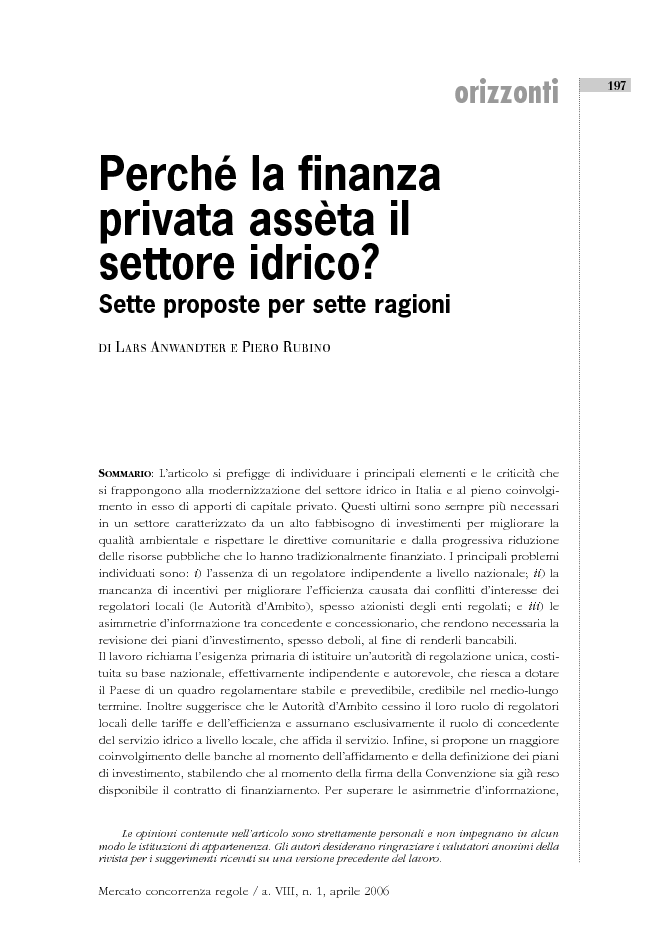