The article analyses, from the European perspective, the intersection between intellectual property (IP) and competition rules at large, encompassing both antitrust and unfair competition law. The intersection with antitrust traces back to the early European competition law's interference with negotial relationships among IPowners and licensees. Here the normative approach has undergone a substantial change which has eventually led to the adoption of the new Technology Transfer Block Exemption Regulation (TTBER) 2004. The new regulation reflects an in-dept adherence to economic principles: hence, it is much more sensitive towards the pro-competitive advantages and efficiencies flowing from horizontal and vertical agreements that were once blocked "per se". The analysis then moves toward the most recent and troubled side of the interplay among IP and antitrust law and policy: namely, the likely intrusion of competition tools to soften ip-owners' exclusive faculties whenever their exercize is able to seriously hamper competition. At this regard, the author analyses the different approaches adopted by the European Commission and Court of Justice, as well as the different orientation endorsed by North-American courts vis-à-vis the "essential facility" doctrine's application to IP. The author supports the pro-opennes orientation adopted by the Commission with regard to information and communication standards - this in its policy guidelines as well as in the case law: last but not least, the recent Microsoft decision. In the opinion of the author, not only the Commission's position seems to be more in line with competition goals but also better aware of the stringent link between restriction of competition due to an improper extention of an ip-right and the hampering of innovation that comes thereof. Eventually, the author explores the relationship between intellectual property rights and unfair competition provisions. The study of this second interrelation shows how unfair competition rules, initially employed almost like an IPRs' proxy - i.e. as a set of normative tools employed to strenghten and prolong IPRs' excluding faculties - now serve the purpose of protecting entrepreneurs from misconducts regarding competitive assets "distinct" from those specifically covered by IPRs. 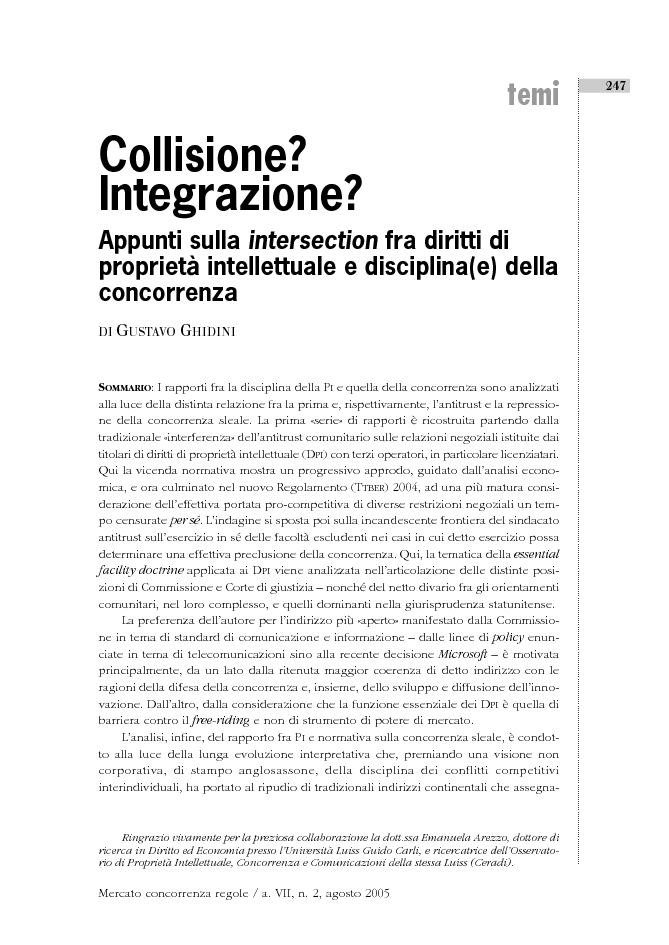