The decree issued with the last budget-act has changed the "Cassa Depositi e Prestiti" (bank for depots and loans), which was a public institution, into a private company. After the formal privatization the State held 100% of the shares, but then it sold a minority of their shares to the ex bank-foundations. The "Cassa Depositi e Prestiti" played a crucial economic role aimed at gathering depots from families and financing public bodies, especially the local ones, at a discounted interest rate. So, the "Cassa Depositi e Prestiti" was a mean for fiscal policies of the State, because it couldn't evaluate whether the public bodies deserved to be financed. Will the "Cassa" have the same role, after its formal privatization? The "traditional" activity of financing public bodies will be carried out by a "separate administration" of the "Cassa". This "administration" is not a separate entity, so the creditors of the "Cassa" for other activities can take legal action against the assets managed by the "separate administration". Moreover, the other shareholders of the "Cassa" (ex banking foundations) have preferred shares, so the "Cassa" could be led to manage its activities, aiming at maximizing profits, evaluating whether the public bodies, asking for a loan, deserve to be financed. When the "Cassa" doesn't grant the preferred dividend, the private shareholders can withdraw their shares; a legal problem could be raised by the statutory rules for calculate the value of the withdrawn shares: these rules are probably not compatible with the new norms of the Italian "codice civile", so they could be replaced by these rules, which grant the with-drawn shares a higher value. If it is the case, then the withdrawal could be dangerous for the "Cassa", so it will be led to manage its activities only for maximizing profits and not also for public goals. The formal privatization of the "Cassa", moreover, raises the question whether the new company is a bank or not. The decree stated that the "Cassa" should be treated as a financial intermediary, according to art. 107 of the banking act. From an objective standpoint the "Cassa" is, in spite of this norm, a bank. Why did the government decide to regulate it like a financial intermediary. The answer is, probably, that only banks, and not financial intermediary, suffer severe limitations in acquiring industrial, non financial, shareholdings. 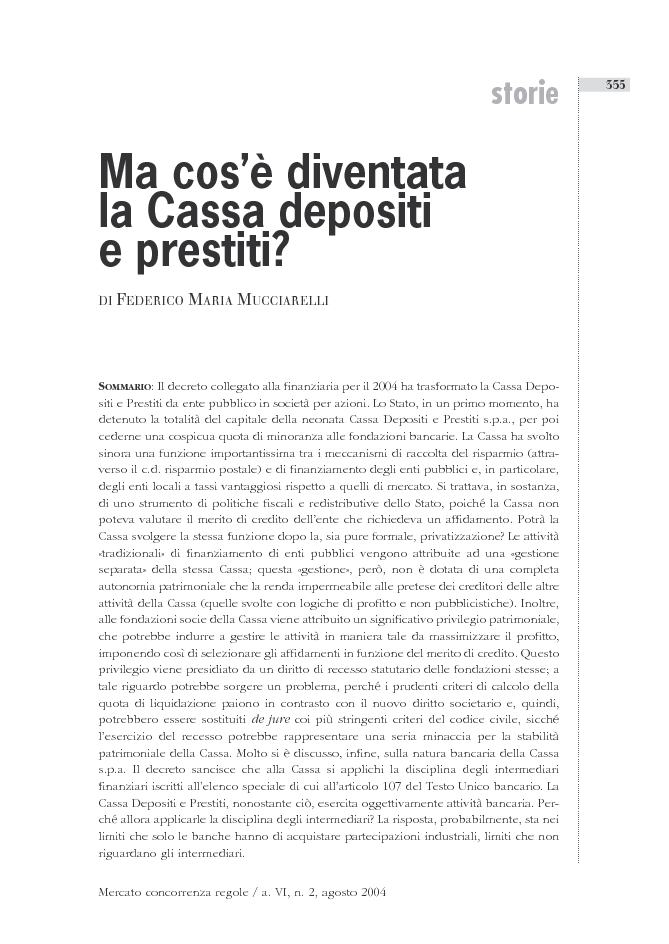