This paper analyzes the procedural and operational progress of the SEZs (Special Economic Zones) and gives an account of the main results of a survey conducted on the contents of the Strategic Development Plans. To give impetus to Italy’s industrial policy starting from the South, improve the competitiveness of businesses and reduce the territorial gap, full-of-promise SEZs represent a great opportunity. However, it seems appropriate to deepen some procedural and methodological issues that emerged during the analysis carried out. Issues such as the fragmentation of the areas and their territorial dispersion, the subdivision of tasks and functions between the various subjects that participate in governance in various ways, the selected sectors of intervention and, on the other hand, the low level of specialization of the areas, the alignment between territorial development objectives and SEZ objectives, a necessary condition for disseminating the benefits and driving the regional economy. Such an ambitious operation would deserve to be coupled to an industrial policy enhancing its impacts and strengthening the connections within the supply chains, between the production sectors, between production companies and those of logistics, between companies and research centres, between companies located within the SEZ areas and those outside their boundaries. This paper falls at a significant moment in the public debate on the topic: the Minister for the South and Territorial Cohesion has declared on several occasions the desire to relaunch the SEZs with specific measures and budgeted items, all 8 SEZs of the South have approved their respective Strategic Development Plans and 4 have been established with prime ministerial decree, the activities for the new planning period 2021-2027 have started with a meeting for the drafting of the Partnership Agreement and the regional and national Smart Specialization Strategies, which must be revised and in their new shape will better support the interventions in these areas. 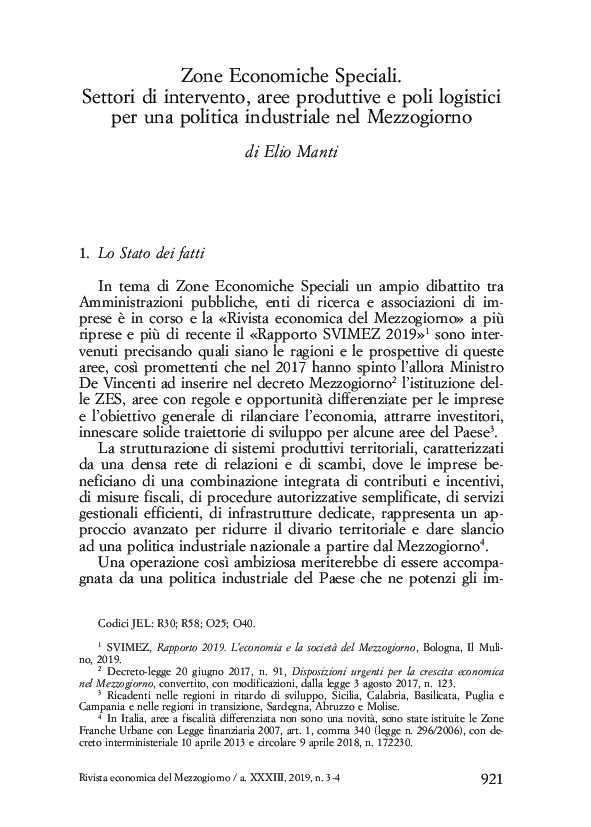