The aim of this paper is to evaluate the effects of what can now be defined as the second demographic transition that is affecting our country as well as the most advanced ones in the western world. A process where a declining birth rate succumbs to a growing mortality rate and the support of the population is entrusted only to the contribution of migratory movements that are now, and it is estimated they will be in the coming decades too, largely insufficient to fill an ever-increasing negative natural balance. Northern and Southern Italy are, and even more will be affected in the future by these changes in different ways and times leading to emphasize the dual nature of our economic and social system. The new terms of the southern question increasingly coincide with the new demographic situation which, if not somehow controlled, will itself be the fate of this area and the nation. Within the next fifty years our country will have a much smaller and definitely aged population. Younger generations will be increasingly smaller and the marked reduction of active generations in working age will inevitably reflect on the economic system that will shrink and change its composition. A decrease in the active population will tend to depress economic activities declining in a substantially different way in the two parts of the country, thereby contributing to keep off the possibility of convergence between the two economies over time. Only thanks to exceptional measures aimed at raising, to levels never reached in our unitary history and with unthinkable dynamics so far, participation in work, especially women’s, could the North-South divide be reduced, up to 20 percentage points in terms of GDP per capita (the ratio between these two GDPs would rise from the current 55.4% to 74.6% in 2065). However, it would be an approach not in conditions of growth and economic development as it was in the period between the mid ’50s and ’70s of the Twentieth century, but in a condition of falling back of the economy and contraction of the potential expressed by an active population decimated and also in rapid, tendential aging. 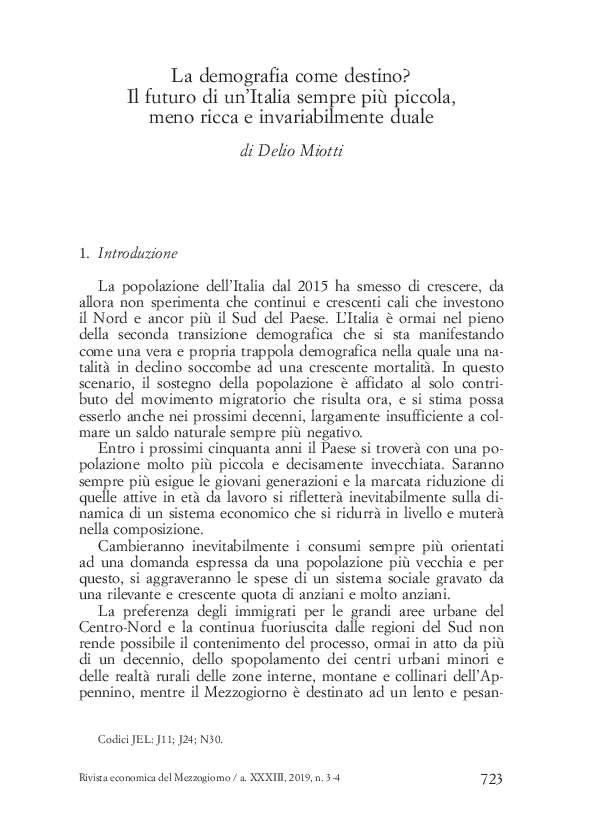