This article intertwines the history of education in a large village of Alta Irpinia, Calitri, with that, on the one hand, of demography and migration of the inland areas of the South and, on the other, with their lack of development, despite attempts (also through struggles) to change the social life of the country from within, by peasants, artisans and young people, in the late Nineteenth and early Twentieth centuries and after the Second World War. The dead weights or the factors of decline, including natural disasters, as lastly 1980 earthquake, which definitively lacerated so many villages, in their territorial structure and in human and social relations, prevailed on the opportunities offered by education and on these attempts and struggles. The aid received from the rest of Italy and from abroad for the necessary reconstruction offered only a partial and temporary feeling of relief. Migration and demographic decline – together with other factors common to the entire South – depriving these villages of many vital energies, have also thwarted attempts to strengthen civil society. As a result of those factors, the positive results obtained by education, as mentioned above, were also ephemeral or, paradoxically, triggered a slow decline of the land. The migration of worthy people, which since the end of the 1950s has increasingly involved educated young people, has indeed marked the definitive decline. But the working hypothesis of a more in-depth investigation seems to me to be that migration – if it is a cause, as has been already said – is also definitely the effect, of those dead weights and, therefore, of the decline of a village of the so-called «bone» of Southern Italy. 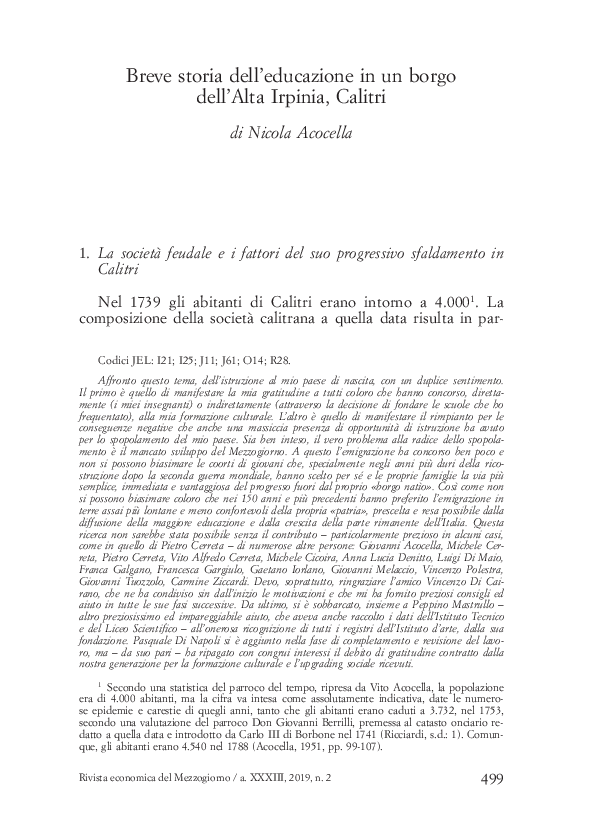