More than ten years after the crisis that started with the failure of Lehman Brothers, we are still stunned. On that day, 12 September 2008, the difficulties of the system on which many of our certainties had rested were revealed, one of the most serious post-war global financial crises arose leading to new forms of poverty, inequalities have increased with an unprecedented escalation of fear and distrust in the future. It has been not only an economic and financial crisis, but also a profound crisis of cultural and social point of references, to which we have not been able to give a structural answer yet. The very fragile South of Italy, which had suffered greatly over the last ten years, also showed signs of recovery for a short period; but today it seems to struggle along again. In «rethinking» the entire economic system to attempt to solve the most serious problems arising from 2008 crisis, a reflection is urgently needed that also encourages to identify a new role for the State both in the economy and in society, above all through the pursuit of new industrial policies. Specifically, as far as Southern Italy is concerned, looking at the experience that INVITALIA, the national agency for investment attraction and business development, has pursued in recent years, the revival of industrial policies must pursue three objectives: to intervene on «market failures», to set up mechanisms to interact with companies, to provide quick responses to the changing needs of businesses and citizens. To do this, it is necessary to start from four fundamental variables: time management; the reduction of the gap between administrations and businesses; assigning priority to reducing the gap between Southern Italy and the rest of the country; the creation of a business environment conducive to innovation. 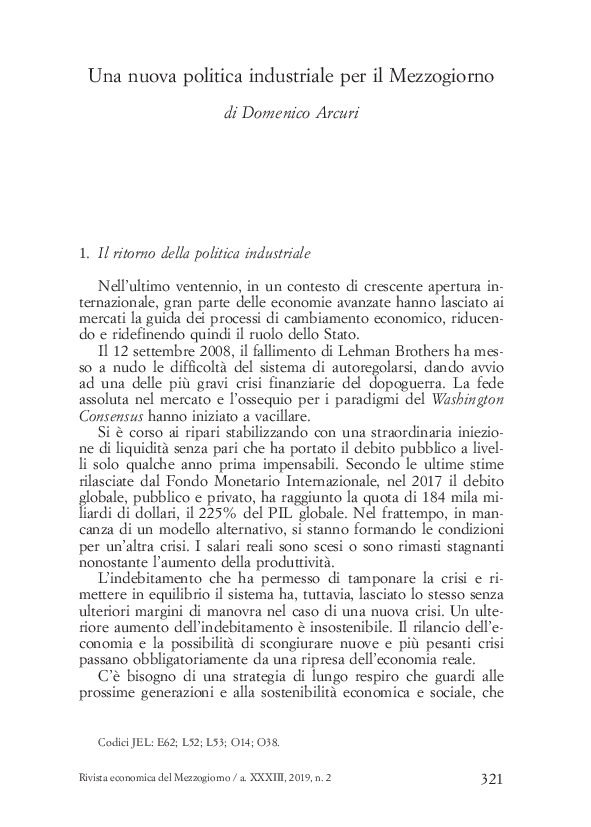