The inability to design a clear and organic model of industrial development, a centuries-old economic backwardness, the responsibility of a local political class - unprepared from a technical and administrative point of view and disinterested in the fate of the city - led Naples to a decadence without return in the decades following the Unity. While the city lost its role as a privileged centre, entering a wider market and without the protectionist barriers of the Bourbon age, the limitation of its commercial potential and its commercial traffic came to light. Although in the first two decades there was no immediate backlash on Neapolitan trade - at a time when large-scale international trade was reducing the barriers between countries, accompanied by the development and modernization of infrastructure - the increased ship traffic failed to bring about a proportional wealth increase for the city, while the port was increasingly taking on the appearance of an airport for migrants, remaining limited to regional borders for goods traffic. Above all the urban structure suffered this crisis, being now inadequate to the needs of traffic, infrastructure and services of a modern city. The post-unitary transformation strategy therefore lacked an organic project of interventions, limited to partial interventions, which were not able to trigger a process of transformation of the metropolitan area. This research sheds light on how the two main issues - the development of port infrastructures and the transformation of the area in the industrial sense, strictly interrelated and complementary - were sore points in a historical moment in which the first real globalization and the development of international trade in the modern sense was taking place, probably generating one of the greatest missed opportunities that would have condemned the fate of Naples and the surrounding areas. 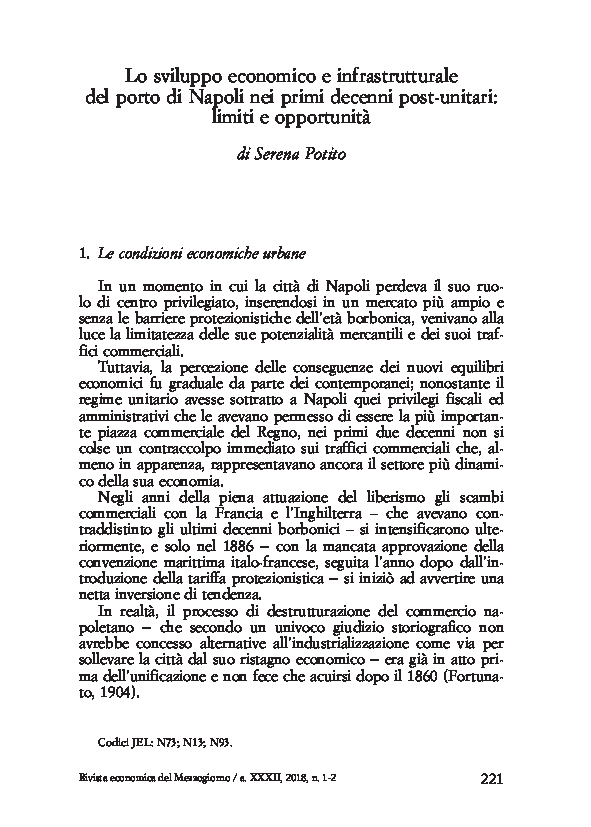