This paper aims at reflecting on immigration issues in Italy and to reinvigorate the debate about that matter in a more modern and open-minded way, avoiding superficial and propagandistic visions that a lot of time affect this phenomenon every day. Italy has been facing immigration in a structural way since the Seventies, when the arrivals overcame the departures, inverting the flow of emigration that has always had a major role in Italy, even before the unification process. In fact, starting from the Seventies, Italy has been considered an arrival point for people coming from developing areas, like Africa, Middle East and Eastern European countries. While the peninsula started bearing the aging and the zero-rate growth of population, the countries where these flows originated were affected by a demographic explosion. Nevertheless, this paper clarifies that the immigration process is relevant, but it never showed itself as a huge emergence by numbers. Moreover, immigrants are an extraordinary resource for our country: apart from the interesting and enriching process of cultural crossover they propose, they actively contribute to the GDP creation and, above all, they permit the payment of a huge number of pensions thanks to the contributions they deposit. During the last years an increasing number of immigrants is based in the Mezzogiorno, also for the arrivals coming from Libya. An example is that of Castel Volturno, where they work in the primary sector, like servants or workforce in small businesses, or that of Naples, recently chosen as an arrival point by a huge number of Chinese people. Moreover, all the Neapolitan area shows a robust presence of Ukrainians and Filipinos. To sum up, immigration is an extraordinary opportunity both for the Mezzogiorno and for Italy. 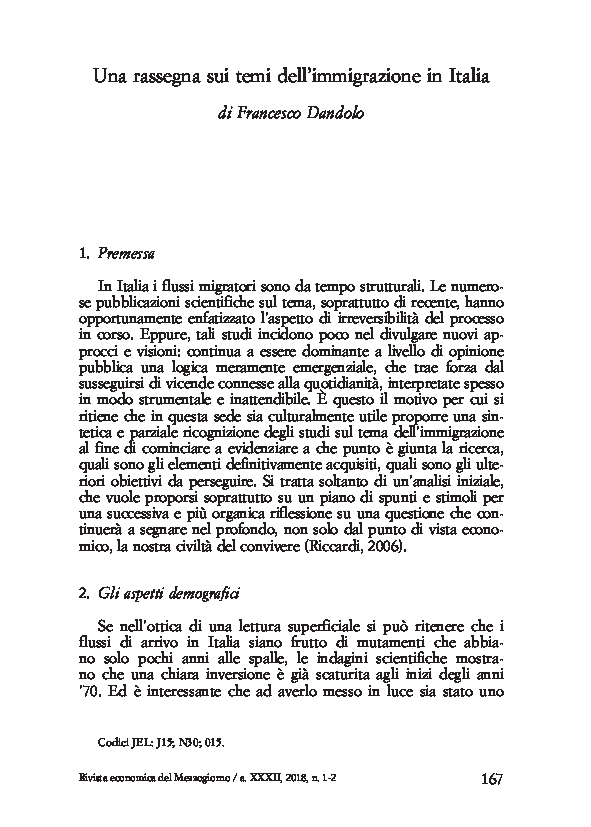