This paper focuses on the proposals for the implementation of a new division of functions between the State and the Regions (institutional federalism) that the three Regions (Lombardy, Veneto and Emilia-Romagna) want to obtain using the process envisaged by art. 116, third paragraph, of the Constitution. The second part of this research assesses the effects of the proposals advanced as to their funding (fiscal federalism), once the matters will be devolved to the Regions. The investigation of this lattertopic will use the tool of the «tax surplus », through which we can evaluate the distribution of resources between the different territorial areas of the country and the adequacy of the redistributive function implemented by the State. The estimate of regional tax surpluses in Italy shows a decrease in the redistributive function of the State between 2000 and 2015, especially when the interests enjoyed by citizens owning government bonds are reported within the total expenditure. Finally, this study shows that if the unjustified proposal to allocate to the Regions that will implement differentiated federalism resources not corresponding to the needs (such as the Veneto Proposal) would be accepted, two impacts would occur: the first would affect the horizontal dimension of equalization as it would change the distribution of public resources in favour of the regions that will request more functions; the second would have effects on the vertical scale of equalization as it would reduce the amount of resources available to the central body to implement the redistributive policy envisaged by the Constitution and to finance the minimum functions that will still be left to it. 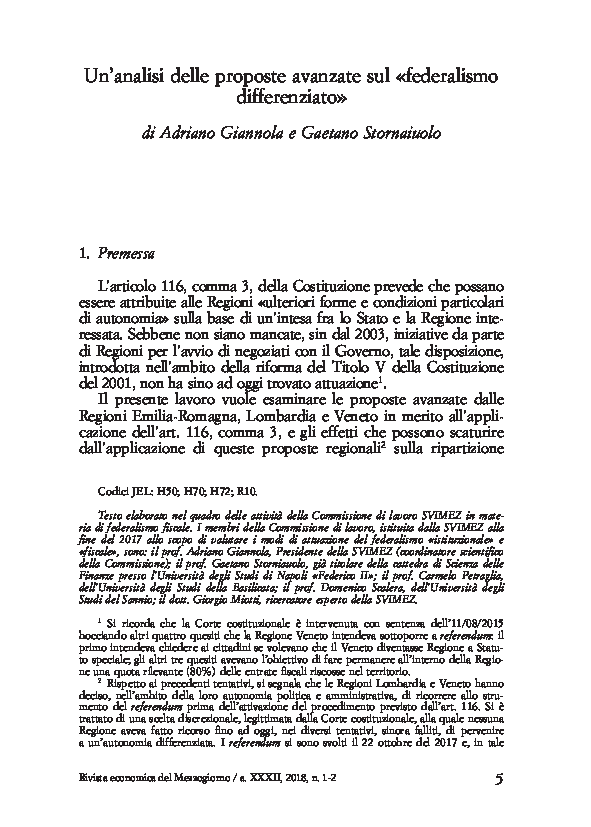