This paper investigates the relationship between the quality of the educational paths and the spread of the phenomenon of over-education among young graduates in Italy. To this end, the data from the School-Work Transition Survey carried out by the INAPP (former ISFOL) in 2014 on a representative sample of individuals aged between 20 and 35 years are used. The empirical analysis shows that about 48% of young graduates say they are in a condition of overeducation, a figure that appears to be relatively uniform at national level. The application of simple regression models give verification to the following results. Firstly, the possession of a degree (three-year or master's degree) in technical and scientific subjects significantly reduces the likelihood of over-education compared to humanistic and professional degrees in all Italian regions, while post graduate specialisation and/or research doctorate increases significantly such risk, especially in North Italy. Secondly, the other measures of the quality of the educational path, such as the repetition of a school year and the marks, have a marginal impact on the perception of over-education which, on the other hand, tends to decrease as years pass from the achievement of the last educational qualification. Thirdly, such evidence is also confirmed when Heckman's sample selection procedures are applied. This suggests that a mechanism of inefficient assignment of most qualified individuals' positions and skills to jobs offered by businesses is a phenomenon that quite uniformly characterises all the Country. 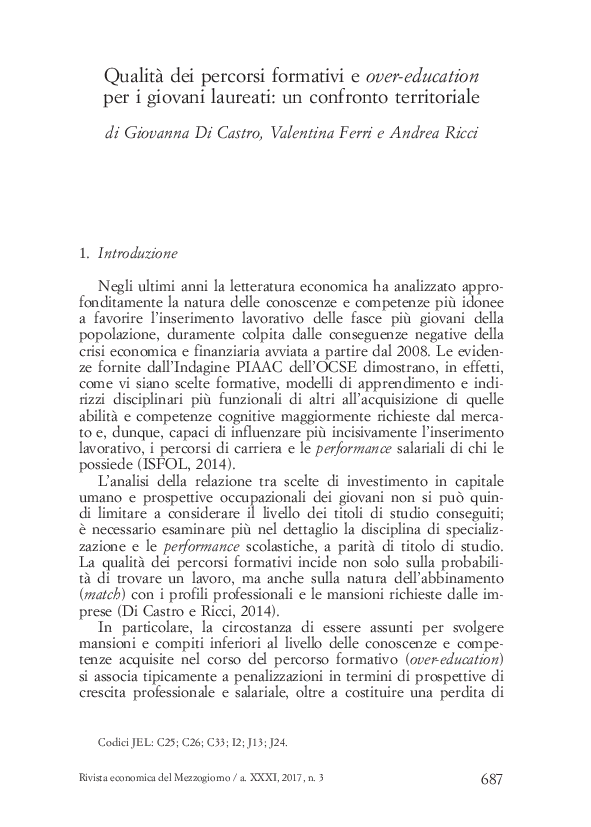