The Stability Pact, in particular after its tightening in 2011-2 through Fiscal Compact, the Two Pack and the Six Pack, greatly reduced the possibility of EU Member States to make a debt to invest. Italy, in the 2017 Budget Programme Document, commits itself to gradually lower its net borrowing up to zeroing in 2019; consequently, it reduces its investments, particularly in Southern Italy. An actual example is the postponement of the 2014-2020 Development and Cohesion Fund (DCF) expenditure, that is a fund almost entirely (80%) intended for Southern Italy: 2016 Stability Law puts off spending by 29.7 billion (out of 38.7 billion of DCF funding) until 2019. The 2017 Budget Law increases DCF's total allocation to 46.6 billion, while at the same time postpones DCF spending of 35.1 billion (out of 46.6 billion) after 2020. DCF is needed in the South because it contributes to the financing of important works, such as the railway line Naples- Bari-Lecce-Taranto, the Salerno-Reggio-Calabria rail backbone, the Messina- Catania-Palermo rail backbone and the Sassari-Olbia motorway. Such works cost 13.6 billion: as of 30 June 2016, 2.38 billion have been spent; to complete them, further 11.27 billion are needed. Current EU budgetary constraints reckon that the deficit/GDP ratio is the debt to complete such works. On the contrary, the net debt for the Italian contribution to support EMU countries in financial difficulties has been cut off by the deficit/GDP ratio: such contribution from 2010 to 2014 was 60 billion. In this situation, an alarm is raised and a solution is suggested. The possibility of making a deficit for investing could be totally cancelled if the German proposal for a new European directive on a second sovereign debt bail in was approved: the banks in the Countries of South-Europe should sell their respective government bonds that exceed 25% of their net assets, the spreads of South-European bonds towards the «Bund» would rise, interest rates in South-Europe States would rise and it would be difficult to make a deficit to invest. Otherwise, such a EU directive should be avoided, investments should not be totally taken into account in the deficit/GDP ratio and all the resources available should be allocated for the creation of a self-centred production area in the South. It is necessary a reform of the productive structure of Southern Italy, based on three interventions: the connection through Potenza of the Tyrrhenian rail backbone to the Adriatic rail backbone; the realization of three polycentric cities, one of Apulia and Lucania, one Calabrian and one in the bipole Messina-Reggio-Calabria; the transformation of the ports of Gioia Tauro, Taranto and Crotone into the headquarters of world logistics. 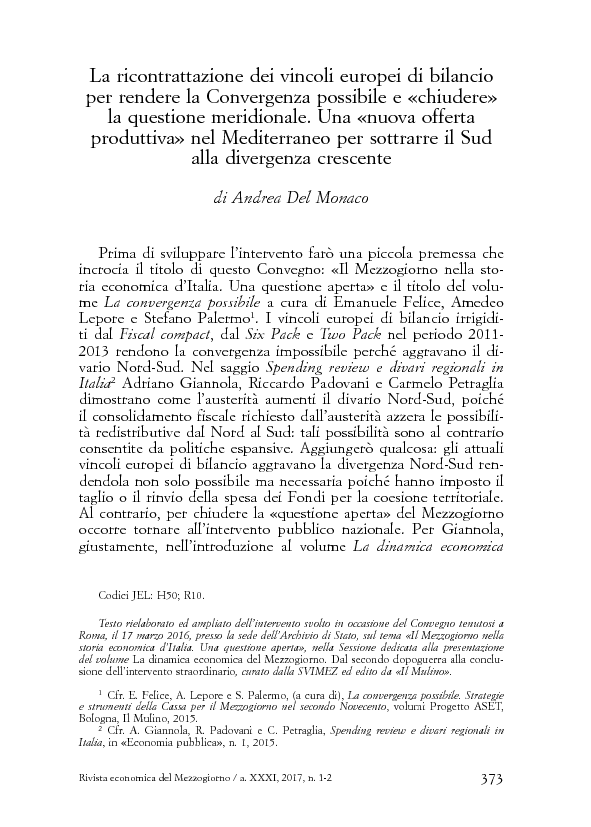