The session organized by the SVIMEZ within the XXXVII AISRE Conference on Matera is amongst the most interesting attempts to identify and define a strategy to optimize the potential of a wide inland area, in the continental South and representing a linkage among strong regions such as Basilicata, starting from an absolutely valuable urban setting. The Basilicata region poses the paradox of being geographically both central and peripheral in southern geo-economics. Whereas in the map of development an area can be central only if the reasons of cohesion strengthen and the fault lines of division between coastal and inland economies are tackled. In this scenario, Matera may experience a double historic opportunity: winning a productive and civil bet and representing the leverage to construct the connective tissue of a South reassembled in its unitary character and consistency. Matera as European Capital of culture has to be considered as a paradigm of an expansive process that not only enhances its urban, economic and civil heritage, but also uses it as an infrastructure for the region as a whole and this may be one of the most original features that SVIMEZ has proposed to the country with the «Report 2016» and is committed to developing in 2017. Matera was the «place» of the social question and enjoyed a privileged vantage point of urban, social and anthropological, political and scientific observation; furthermore, it successfully tested literature, painting and cinema. It is an extremely attractive city and a «fertilizer» that can be useful as a global resource and can be beneficial to itself and to the entire region if it is the basis for those interventions that more effectively can contribute to the cohesion of the economic and civil system in which it is inserted: first through the modernization of the rail backbone Salerno-Taranto and its connection via Ferrandina to Matera (a city cut off by the state railway system). Then it is necessary to integrate the port and the dry port of Taranto through the creation of an agroindustrial platform and the associated recognition of the Taranto-Matera area as a SEZ that values the unique peculiarities of the historical and archaeological site once belonging to the Magna Grecia. 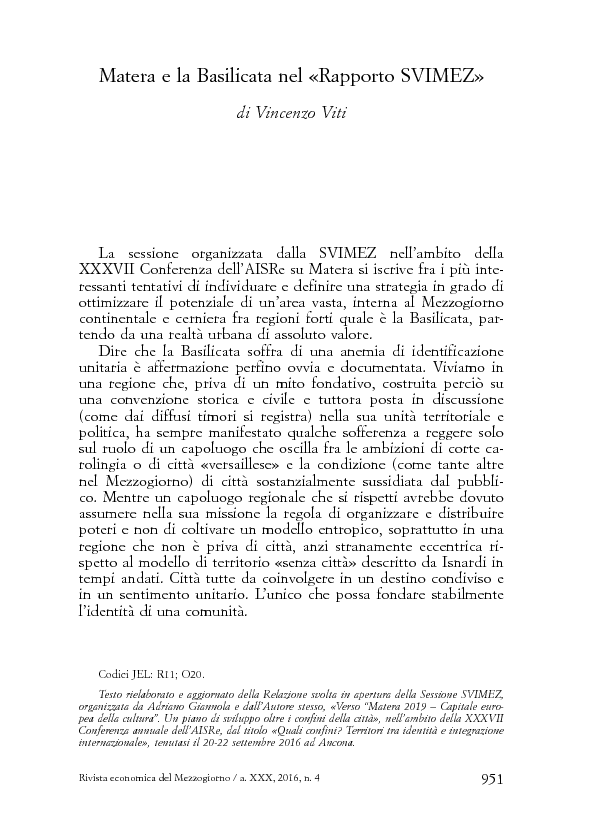