The programming process on the use of the Structural and European Investment Funds 2014-2020 is an opportunity that cannot be lost; considering, in fact, the lack of public resources that characterizes this historical period, it is perhaps the most important and decisive leverage which to count on, not only at regional but also at national level, to reduce those imbalances that pathologically affect territories, and in particular Southern Italy compared to Central and Northern regions, both at both at structural and economic and social and cultural level. It is essential to set a change of pace compared to the past (also relating to recent programming 2007-2013) finally making the funding of cohesion policies effective, which, over the last twenty years, has doubled the resources made available in the various cycles of the programming. In this perspective, this paper has examined those interventions funded by national and European funds in Southern Italy, in order to give quantitative evidence of the effectiveness of cohesion policies. In general, such analysis has confirmed, through the variables examined, some important critical issues related to the same policies. In particular, even considering the importance of certain corrective actions made to the new EU programming cycle 2014-2020 - such as a greater focus on results and the prediction of ex ante conditionalities - it seems difficult to predict, for Southern Italy, a significant and very virtuous increase of the effectiveness of policies. We have also to consider that, in 2014-2020, the distribution of the EU funds is disproportionately in favour of the ten non-Euro countries, which collect 53.3% of the total (22% of it goes only to Poland) and that, for those nations that have preserved their monetary sovereignty, the fact of not having to comply with the constraints arising from the accession to the Euro is undoubtedly a comparative advantage. In this clearly asymmetrical scenario Southern Italy is, inevitably, disadvantaged and in fact, according to the European Commission forecasts, the South is among the depressed areas that less benefit from the potential effects of the cohesion policies of 2014-2020. In the regions of central and northern Europe (particularly in Poland and Hungary), the impact of policy on GDP will be up to five times greater than that estimated for the southern regions of our country. 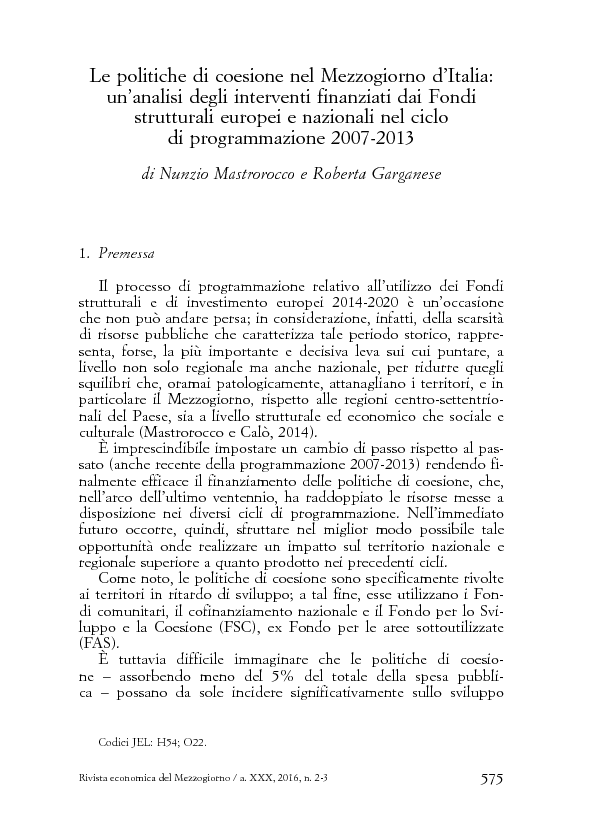