The brief history of the presence of Finelettrica in the electricity sector can be read in the light of the failed objective to start the coordination of electrical groups that IRI could number in the early '50s among those under its control; such goal in the early years of the extraordinary intervention in Southern Italy was connected mainly to the driving force required to IRI through SME - as confirmed by the complementary role immediately and permanently acquired by Finelettrica in the funding mechanism led by the Cassa per ilMezzogiorno and the World Bank.In those years of public industry strengthening, the documents are evidence of the difficulty of attributing to Finelettrica the function of a group leader, even according to the Articles of Association; attempts did not fail to alarm the private electricity oligopoly in which the subsidiaries were constrained more than they were willing to cooperate with the holding company IRI in implementing the first steps towards integration, starting from the thorny issue of the power line that connected the productive centres distributed on distant parts of the national territory. The analysis of the documents shows that this state of affairs was exacerbated between the second and third Parliament, when it was accused by ENI, already facing the challenge of product diversification. The hydrocarbons authority, whose model acts as a counterpart of that of the holding company IRI, was in fact about to take over all state holdings in the energy sector, starting from Finelettrica, aiming at achieving the dual objective of entering the electricity sector as opposed to private stakeholders (renewing the transaction occurred in the hydrocarbons sector) and of settling in the South as a monopoly, at a stage that was considered decisive for Southern industrialization destiny. The keystone of ENI's opposition strategy to Finelettrica would be the nuclear initiative, which for various reasons just in the second half of the '50s became central in the southerner technocrats' programmes connected to the World Bank, affecting the prospects of future development of the Italian industry as a whole. Finally, when nationalization came back to the centre of the public debate, the action of Finelettrica appears to get stuck, on the one hand challenged by the public interventionism advocates, on the other hand influenced by private interests: just when only a holding strengthening, after overturning the internal balance of power between the top management and subsidiaries, could constitute a credible basis for IRI as an alternative, i.e. the «irizzazione » plan of the whole national electricity industry. Instead, since 1960 Finelettrica had been in fact under strict supervision by the political forces, while the «irizzazione» was going to be sacrificed by the historic agreement between DC and PSI; it would be the nationalization to undermine the power monopoly that Finelettrica was not able to resize - except then produce totally unwanted outcomes by its original proponents.The limits of Finelettrica's action, whose last phase was affected by the reviving of the debate on nationalization, can therefore also be evaluated in the light of the short and long term adverse effects of that operation, on which scholars have also already expressed clear opinions. 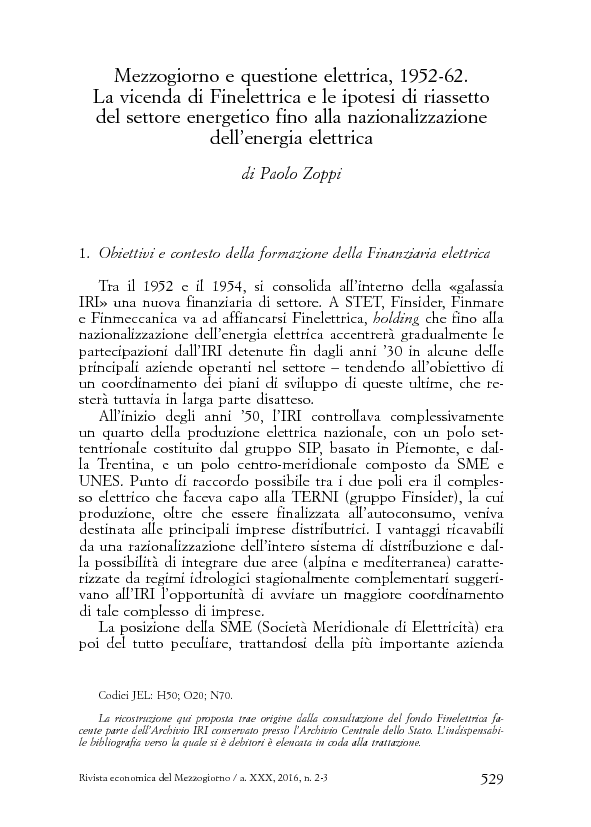