This paper suggests, in the light of the new and numerous contributions that territorial economic statistics has developed in recent years, a reinterpretation of the historical events that led to the creation of regional development gaps in our Country, highlighting the key role performed, both positively and negatively, by policy choices. The choices concerning the interventions in social and economic matters, made by national and local institutions, were essential in determining the rise and decline of the economy of Southern Italy. Such reflection is provided in this paper on the basis of the close association between the implementation of certain policies and the results in terms of regional growth. The analysis is carried out from a historical perspective, particularly studying the relationship between the policies and the development of the South from the Fifties to the Nineties, and culminating in the evaluation of the recent «New Regional Policy». The trend of our Country's regional development gaps was made up of several stages, each with a specific profile of policies: this paper starts from the creation of gaps following the Unity of Italy, it examines the growth of gaps during the period between the two wars, shows the first significant and lasting phenomenon of convergence between the North and the South of Italy in the twenty years following the war, and finally discusses the sharp slowdown in the mid-seventies, when the convergence process stopped, and opened the way to a longer, more recent period, where the persistence of regional gaps remains the main feature of incompleteness of the history of the unity of Italy. This analysis shows how the slowness of the convergence process is now mainly due to the lower quality of public spending in the South and the decline of the intensity and the quality of public services that in this area negatively affect competitiveness and growth. This gap can be bridged only by the action of national policies on public services provision, which have significant effects for regional development as well. 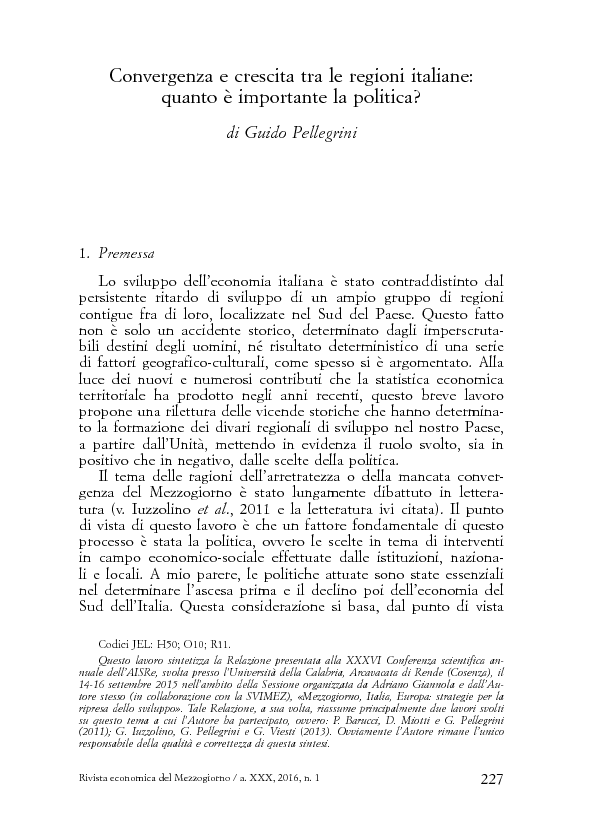