This paper analyses the process of southern modernisation, arguing that the primary reason why development failed in southern regions is the presence of «extractive» institutions which created an inefficient model of political capitalism. Such institutional set-up has turned into distorting southern modernisation in a particularistic way, thus collecting capitals in favour of small elites and providing subsidies which negatively affected southern regions' economic performances. This paper retraces both the historic evolution of southern «extractive» institutions and the reasons of their persistence. Then it explains their features and effects, linked to a peculiar local institutional set-up, both at political and economic level. Such paper focuses also on the subsidies granted by these institutions both in economic markets and in electoral issues, as well as on the trap of rationality developed by such subsidies. Those mechanisms internally strength ening southern institutional set-ups and those dynamics producing an outward representation, towards other territories, are analysed. Finally, the issue of lack of technological innovations in South Italy is discussed, being as well closely related to the presence of «extractive» institutions and their revenue in favour of few economic agents. This paper concludes that, due to the progressive deterioration of socio-economic conditions in southern regions and the subsequent strengthening of internal «extractive» institutions, there could be growing negative externalities throughout the Country. This is why, today more than ever, the unresolved Southern Question is becoming a national question, which requires an appropriate policy to be tackled properly. 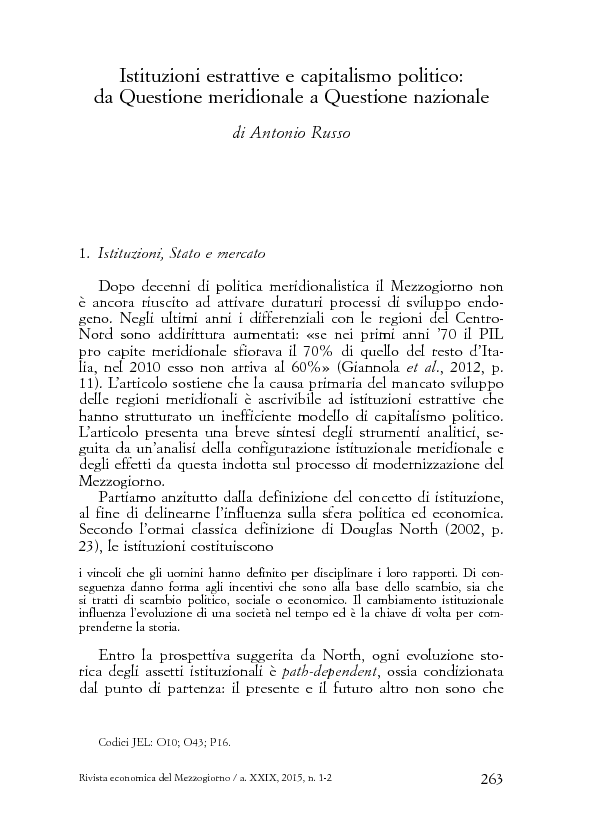