A renewed interest in the thought and the works of Alberto Beneduce does not only serve to reflect again on a protagonist of the Italian events of the XX century, but it is also a way to address some central themes of the evolution of the Italian economy and to verify the relevance of his theories in the light of recurring economic crises and the role of the State as support to industrial development. The essential participation of Beneduce to the processing government decisions, with the aim of overcoming an adverse phase of the Italian economy, led to the gradual shift from an old-fashioned financial and productive structure to a modern industrial structure, which, after World War II, would have been able to compete at international level. In fact, public intervention was not inspired to conventional schemes, but to the need for a more streamlined and effective State action in the economy, introducing the logic of private enterprise in the management of the authorities he helped form. On such basis, «Beneduce system» was built, which provided a model for accelerating Italian industrialization and promoting economic growth throughout the country. The analysis of a complex personality like Beneduce's rests on his experience, his education and his ideas, as well as on the multiform aspects of his commitment and the value of his reform, originating from the strong influence of Nitti and conducted with great autonomy in the different institutional roles he covered. Alberto Beneduce, along with other emblematic figures, represented the paradigmatic experience of a strategy aimed at strengthening enterprises and markets, in major financial and manufacturing sectors of the country, in order to modernize Italy through an approach that anticipated development policies from the top and the extraordinary intervention. 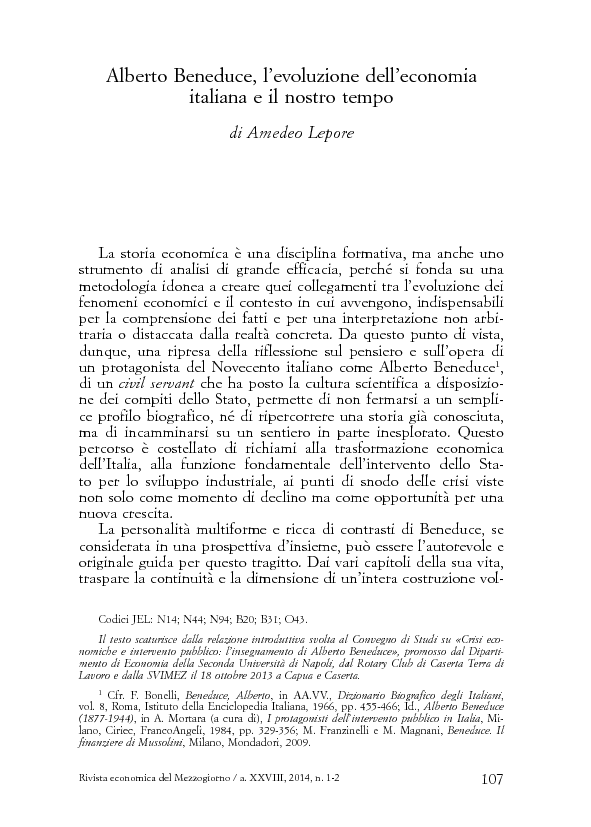