The 90 Cultural Service Centres - designed and coordinated by FORMEZ over 1967-1972 - set up and developed a series of solidarity and welfare experiences of postwar catholic and socialist culture. They became a significant instrument of public policy for the Mezzogiorno, creating a network of services based on a plurality of languages and cultural instruments including a library of about 5,000 volumes, at an early phase, in every CSC. The action of each CSC, located in a medium-sized town or large residential districts of the city, took place in the surrounding area with qualified cultural initiatives and services. The FORMEZ promoted and implemented the training of operators, aiming at achieving professional skills able to design public cultural services and to innovate, within the cultural offer, the policies of welfare and cultural recovery that could not allow an increase in a critic and independent cultural consumption by the users. The FORMEZ, in implementing the project with promotion and co-ordination activities, had to fight a series of cultural stereotypes protected and backed up by proposals and initiatives that best suited to political parties than to the planned role of public services. A rushed and incoherent transfer of both the project and its instruments to the Regions, recently established, has partially nullified the service. It has survived through the continuing commitment of many operators, the use of cultural instruments and book collections and also the buildings that the «Cassa per il Mezzogiorno» had built in many locations with a modern design. Such experience, for its dissemination and innovative features might still be, "mutatis mutandis", a good example for the development of public local cultural services, because the characteristics of cultural facilities then reported in the South are still present. 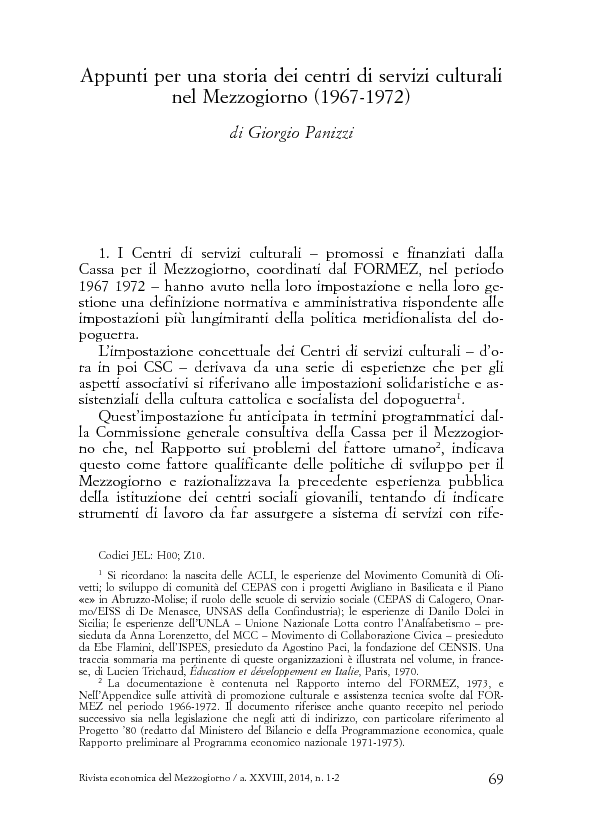