Several papers have examined the social and economic differences between the residents in the neighbourhoods of Naples, showing the complexity and heterogeneity of urban population and reporting, in some cases, a growing social gap. However, the differences in the characteristics (by age and sex) and in demographic behaviours (mortality, fertility and migration) have not been frequently analyzed. This paper aims at overcoming this limitation by providing a further picture of the differences inside the city. The data used refer to the period 2004-2008 and deal with the population, natural (births and deaths) and migratory (changes of residence) events concerning the residents in the neighbourhoods of Naples. Indices of structure, growth rates, standardized mortality rates, as well as the classical measures of intensity and calendar of fertility and migration behaviour have been calculated by neighbourhoods (quarters), municipalities and macro-areas. The use of multidimensional data analysis has allowed us to summarize the similarities and differences among the different areas within the city. This has led to a clear distinction between some neighbourhoods of the city centre, of hilly and Western areas, where a late fertility characterized by the one-child model prevails, and mostly peripheral neighborhoods and the eastern area, where the reproductive behaviour remains higher and earlier than in the rest of the city. A dichotomy that can be reinterpreted in terms of natural dynamism and aging process: the first quarters have now a number of deaths exceeding the number of births and a proportion of old people higher than the Italian national average, while the latter ones have a still positive natural dynamic and the young prevail on the elderly. In addition to intermediate situations, it should be noted that some mostly peripheral neighbourhoods have a strong emigration, almost always directed towards the towns of the belt, as well as the quarters of Chiaiano and Miano are characterized by mortality levels clearly higher than in the rest of Naples. Demographic differences seem to follow only partly the centre-periphery axis, because of significant differences co-existing in the city centre (some neighbourhoods with declining populations and others with a strong capability to attract foreign immigration from other Italian towns and, increasingly, from abroad). The differences observed suggest the presence of specific needs of people living in different neighbourhoods of the city, needs that would require the adoption of targeted social and health policies. 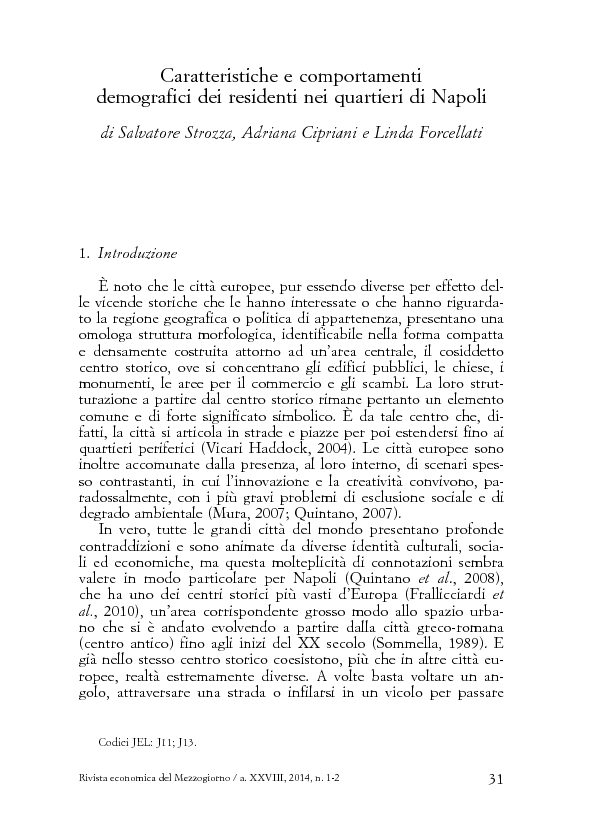