The concern that equality could lead to reduced growth is not consistent with empirical evidence. Over 2005-2012, the most egalitarian countries of the EU15 have experienced not only higher levels of GDP per capita, but also higher growth rates. In these countries, the consequences of 2008-2009 financial market crisis were much less severe than elsewhere in Western Europe. It is therefore essential to ask whether Italy is too unequal to continue to grow and if income redistribution may still be separate from growth in the political agenda. The economic gap between South and Central-North Italy is a critical component of the overall inequality observed in Italy, due to both the difference of mean household incomes between the two areas and the greater inequality observed amongst the southern households. Such a gap substantially depends on the higher average number of dependent individuals living in southern households, on the one hand; and on lower employment rates amongst women and young people that implies less opportunities to earn additional household incomes. As a result, the percentage of poor people out of the total population is significantly higher in the South, although in absolute terms the number of the poor who reside in the Centre-North is larger than those living in the South. Therefore, more than half of the total spending of a measure of support to lower income groups would be spent for the Centre-North residents. 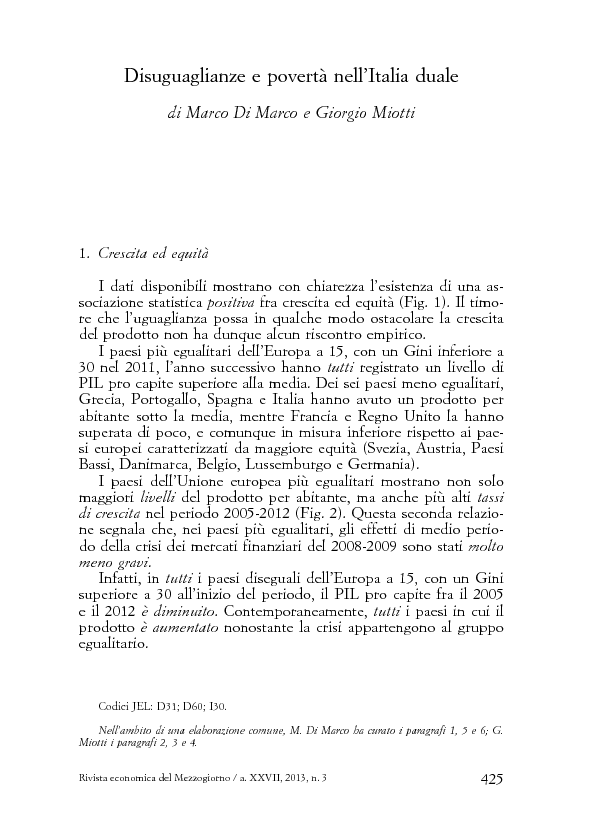