Urban regeneration, specified in the Declaration of Toledo in 2010 as the main line of action to achieve a smarter, more sustainable and inclusive urban development, takes on a special role in the context of the great cities of Southern Italy, still characterized by a large gap compared to the cities of the Centre-North, and in the context of the economic crisis that has deeply affected Italy and other Mediterranean countries. The interventions of integrated urban regeneration, besides acting as an effective driver for economic development and employment, represent also a field of experimentation and an opportunity for renewal of the institutional, social and productive system. Difficult context conditions and the Mediterranean characterization of Southern cities require to formulate specific methods of intervention and not uncritically borrowed from north-European models. More inclusive and participatory models of urban intervention can be drawn from these specific features, able to exploit the complex and layered character of Mediterranean cities. An action plan for urban regeneration, besides playing a vital countercyclical role, represents a strategic medium-term orientation, in order to improve context conditions of the cities, to revive key sectors of the urban and national economy, activating labour-intensive economic sectors, to encourage the creation of green economy companies for a smart, sustainable and inclusive urban management, to focus the variety of European and national funds on strategic projects. Italy, as a country heavily characterised by urban areas and culturally and socially stratified cities, can make urban regeneration a field of experimentation and an indicator of renewal of its economic and institutional system. Successful experiences in the Italian cities can also project national companies involved in the sector of urban regeneration - if adequately supported by public institutions and targeted international relations - towards urban redevelopment interventions aimed at a broader, not only Mediterranean, geographical context. 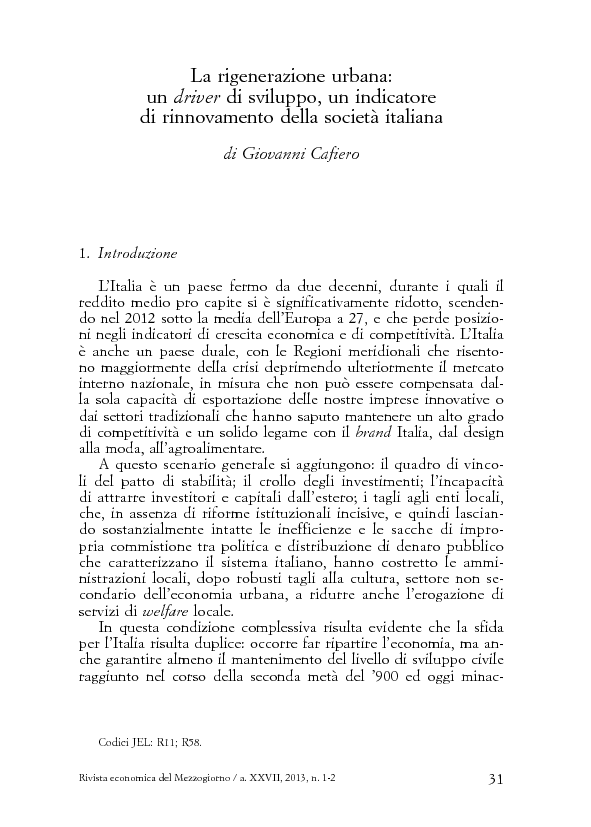