Over the past fifteen years, the UE has pursued a process of socio-economic convergence, spending about one third of its budget in regional policies to reduce disparities between underdeveloped areas such as Southern Italy and richer regions. The aim of this paper is to understand if these disparities have been actually reduced from 1996 to 2009, and therefore to analyze the gap between North and South Italy referring to the dynamics of European regional development. In the first paragraph the theoretical debate on convergence is briefly reconsidered, focusing on national territorial disparity. Then, in the second paragraph, an operational definition of the concept of socioeconomic development is proposed and a methodological path for the analysis of territorial disparities is illustrated. In the other paragraphs (3-4-5), following a perspective that combines the most critical sociological thesis about convergence with Myrdal's analytical categories, the increasing polarization between central and peripherals local societies is highlighted. The results show the decline of the Italian development model and a downright Southern Italy's drift, namely its socioeconomic separation from the rest of Europe. The conclusions are: the EU, like Italy, seems incapable of producing a long range development. This raises a question about the actual capacity of current EU's institutional architecture to produce social and territorial cohesion. 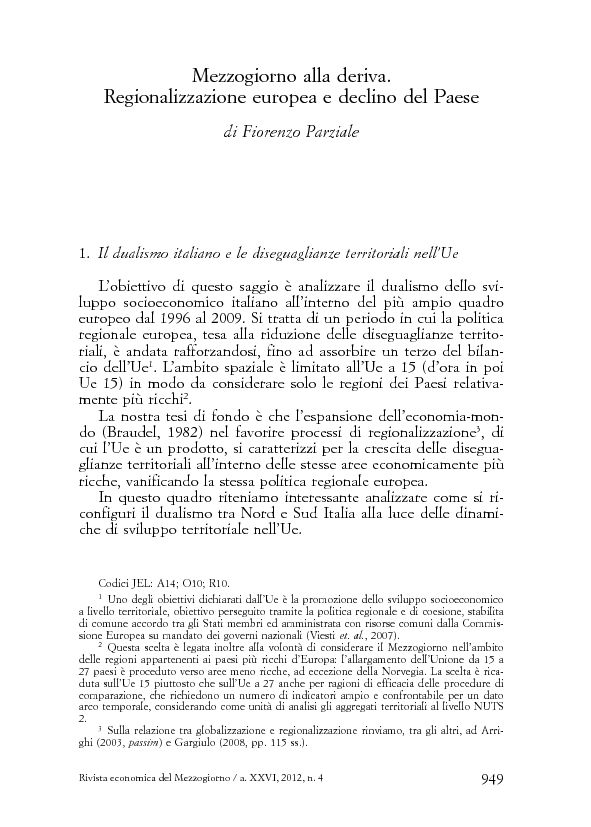