Following 1861's unification and the industrialisation process characterizing the second half of the 20th century, Italy has experienced a long-run process of urbanization affecting both population and economic system. Such a process has had a different evolution in the North and in the South of Italy, not only in the long run, but also in the first decade of the 21st century - when many Southern cities have lost their attraction towards population and businesses. Furthermore, current economic crisis and the failure of national and local public budget have lead to a dramatic decrease in expenses for investments and a weakening of urban welfare, which has to cope with tough challenges, such as population ageing and the shortage of services combining family and job, that contributes to worsen women's exclusion from working-age population. The infrastructural gap affecting Southern cities is progressively accompanied by the risk of a significant decrease in the quality of living and working environment, particularly in big urban areas, such as Naples, which results also in a drain of the most skilled young people. Within such a framework, it is necessary to relaunch a national policy for cities, developing its strategies according to the specific critical points and opportunities characterizing Southern Italy's urban areas. For this reason, it is necessary a National Action Plan which, taking into consideration the relaunch of cities' leading role, provides for a variety of measures - the completion of institutional reforms for local and metropolitan areas' autonomies; the recovery of infrastructural investments; the implementation of integrated policies for urban renewal within European planning strategies 2014- 2020 and their coordination with tax relief incentive measures aimed at fostering employment; the conversion into new welfare models providing for a public offer requalification as well as an effective implementation of the new principles of subsidiarity and integration between public and private; close programme attention, at national level, for Naples, which is increasingly at risk of a complete social and economic collapse. 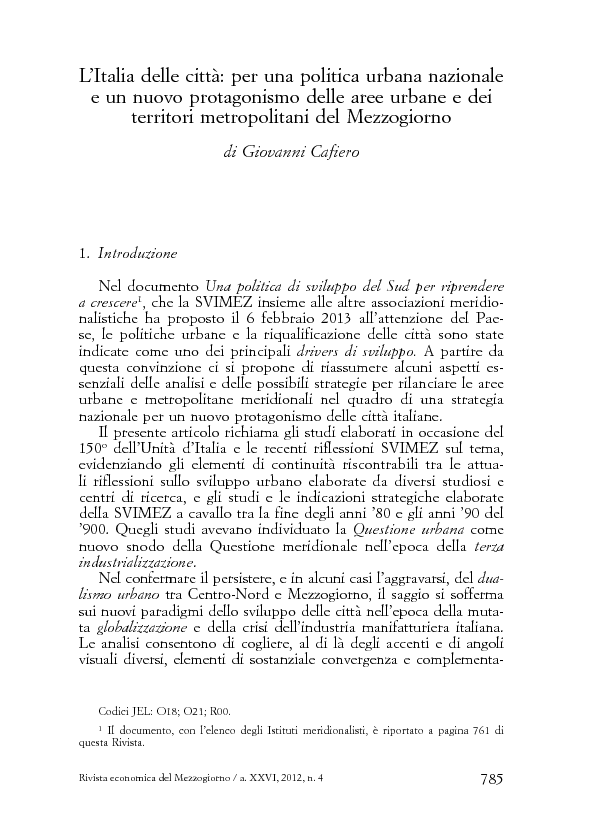